My children decided they wanted the family to do the Wizard of OZ theme this year for Halloween. After checking out store bought costumes I decided I could make a much better homemade Cowardly Lion from Wizard of Oz costume for a much cheaper price.

First I bought a cheap tan sweatsuit with a hood at Marshal’s. Then I purchased fake fur fabric from Joanne Fabrics. I sewed some fur around both wrists and ankles. Then I sewed fur around the chest and the back of the sweatsuit top. I also covered the hood with fur and bunched it in the front to make it look more like the mane of a lion. The fur on the back of the hood was long and was cut into strips to look like the hair on the real Cowardly Lion.

For the ears we bent some wire in the shape of lion ears and sewed some tan t-shirt (an old t-shirt) material over the wires. For the tail I used two mouse tails that we had left over from a previous Halloween and sewed them together and covered them with the tan t-shirt material. At one end of the tail I sewed some fur and the other end I sewed an elastic band so that she could put it around her waist. The hood was great because she could just take it down if she got too hot.

My daughter had all the right facial expressions for the Cowardly Lion which helped make the whole costume very funny. 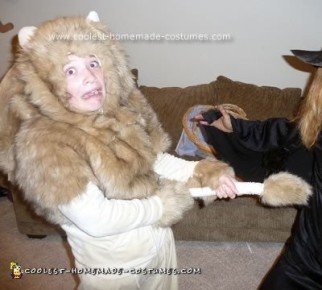 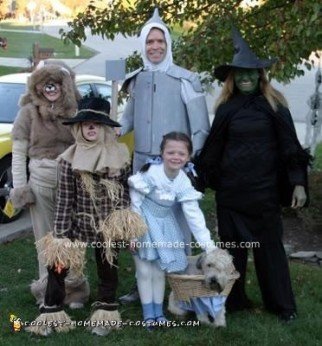