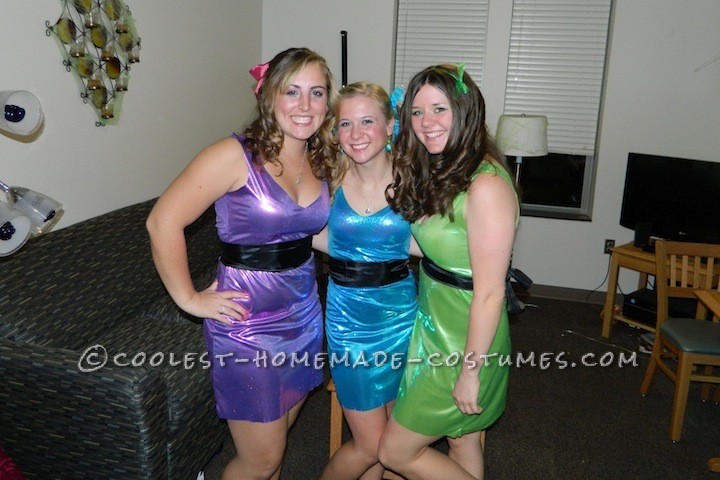 My roommates and I decided to make our costumes last year from scratch.  We purchased fabric and “Buttercup” made the dresses using her sewing machine  (of course she had the other two Powerpuff girls help a little bit with their own as well). We kind of winged it by laying the fabric, folded in half, … Read more

I made both of our costumes from fabric I got at Joann’s (total was about $15). Fred’s costume was the easiest… used one of my husband’s shirts as a guide, and just cut the fabric longer. Mine was much more difficult to make form-fitting. I didn’t feel like going through the effort to mess around … Read more 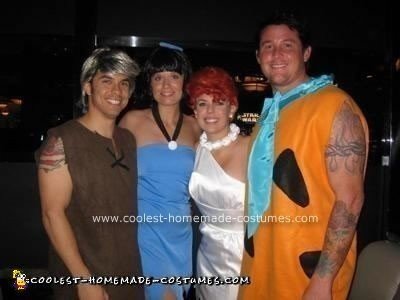 The housewives of Bedrock & their cavemen hubbies! I like to think of us as the new-age Flintstones & Rubbles since our guys are all tatooed up. I made these Homemade Bedrock Group Costumes for my boyfriend and I, and for his sister and her boyfriend. We were the coolest Wilma, Fred, Betty and Barney. … Read more 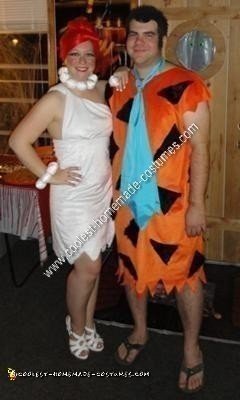 When we were contemplating who to be for Halloween this year, my boyfriend and I were searching for something fun and easily homemade. I thought… how much easier can you get than homemade Flintstones couple Halloween costumes? I happen to know how to sew, so we ventured to the fabric store on a 50% off … Read more 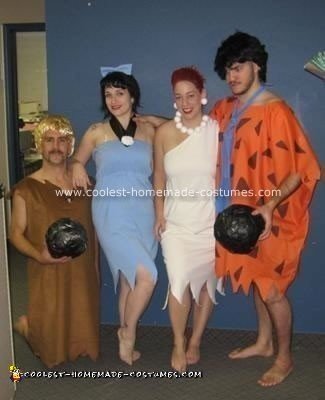 The womקn’s costumes were made by my grandmother, no wigs required, just lots of hairspray and coloured spray for Wilma. Pearl necklace and earrings made with Styrofoam balls. The guys made their own costumes with cheap Walmart material. Each costume cost under $10 to make. Bowling balls made with duct tape and newspaper. This Homemade … Read more 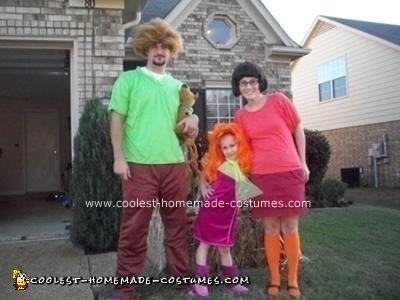 We did a family theme this year: “The Scooby Doo Crew”. I was the only one with a costume made mostly from home. It was very simple. I had an orange shirt, a red skirt and a pair of brown shoes that I used from my closet. I bought the wig for around $9 and … Read more 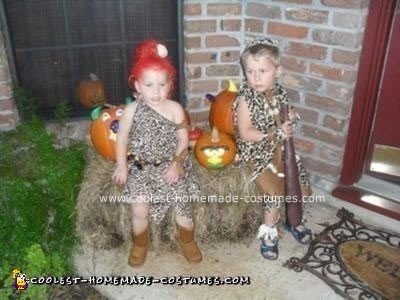 My best friend was recently awarded custody of these 2 children, a couple of months before Halloween. Although they look like twins, there is a year between the boy and girl, who are 3 and 2 respectively. They had never celebrated Halloween before and I decided that Pebbles and Bam Bam would be their first … Read more 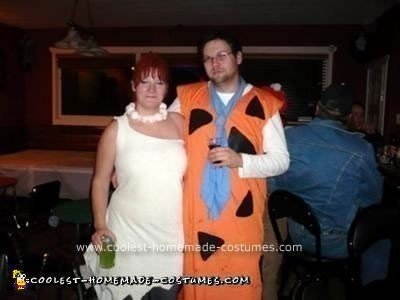 We chose to make a simple homemade Flintstones costume of Fred and Wilma Flintstone. First off we got some material for Fred and a white soft blanket for Wilma. The blanket was cheaper to buy compared to warm non-see-through material. We even had enough of the blanket left to make a shawl for Wilma. Once … Read more 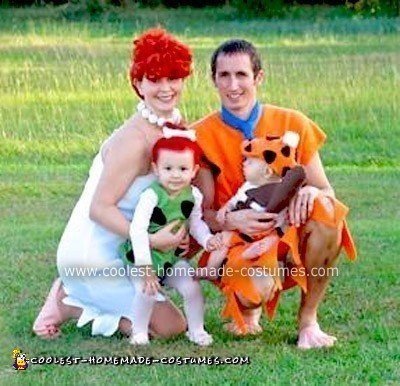 We decided to do a Homemade Flintstones Family Costume this year! I made all of the Flintstones costumes myself and think they are the coolest. It was so much fun as this was the first time I had ever touched a sewing machine. For Wilma, myself, I bought 2 yards of white fleece from Hancock … Read more 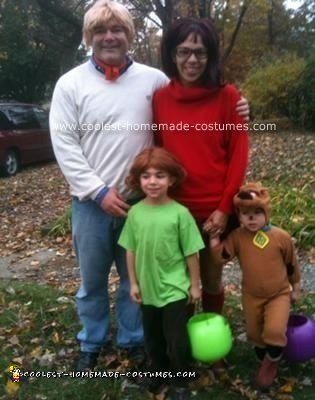 I love to dress the whole family in one theme. My kids love Scooby Doo, so when my youngest said she wanted to be Scooby Doo for Halloween, it was with glee that I decided we should all dress up as the Mystery Gang. My son was all too happy to be Shaggy. I vacillated … Read more 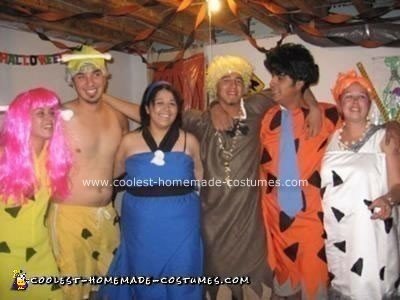 As we do every year, we as a group of good friends, decided to do the Flintstones Group Costume and had fun doing it. Pebbles: Found a yellow dress at a salvation army and glue gunned on some cut out black triangles. Then we found a pink wig and attached a bone headband. Bam Bam: … Read more 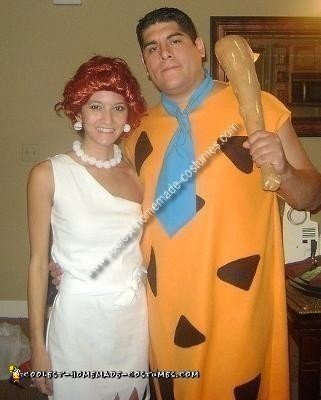 This is what you will need for this homemade Fred and Wilma couple costume (all of the items can be purchased at the fabric or craft store): * A couple of yards of orange fleece (big enough to fit your man) * 3 sheets of black felt 8 1/2 by 11 * Fabric glue * … Read more 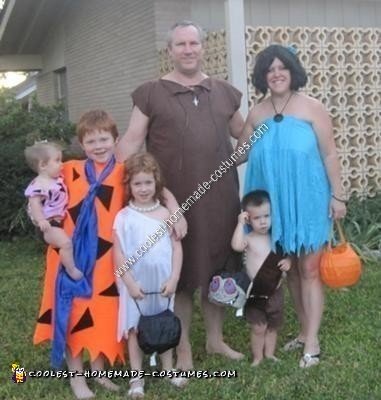 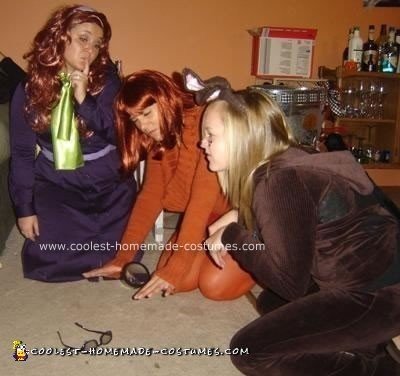 Our group of friends decided to dress as Scooby’s gang for Halloween. These homemade Scooby Doo costumes were very easy to put together. Fred’s costume consisted of a white long sleeved sweater, a blue polo, and navy pants. Orange fabric was purchased for the tie. A blonde wig is needed. Daphne’s purple dress was purchased … Read more 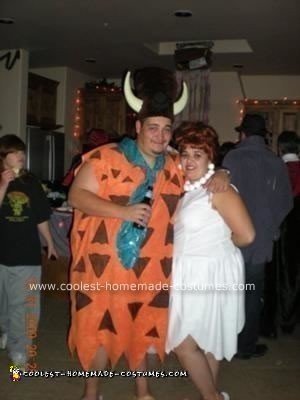 I purchased a Fred & Wilma Flinstone couple costume pattern online, but it was too small for both of us! We therefore had to improvise our own Homemade Fred and Wilma Flintstone Couple Costume. For Fred’s costume, I measured and added inches to the pattern. I bought orange material and cut the pieces out. I … Read more 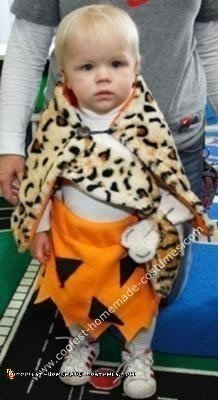 With my son’s white hair and love of banging things I thought a Bamm Bamm Rubble Costume would be the perfect costume for him. I bought orange fleece to make the skirt (I used a pair of shorts as a template to get the shape and length) and sewed in an elastic band and cut … Read more 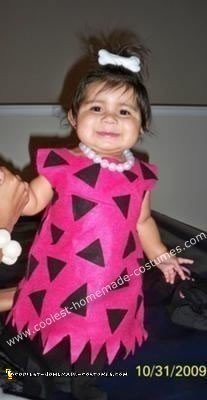 I made my 9 month old daughter a Homemade Pebbles Flinstone Costume. She was Pebbles from the Flintstones. I used bright pink and black felt. I doubled the pink felt, cut out the dress pattern, left 4 inches for the arms, and about 5 inches for the neck. I then sewed up the sides, up … Read more 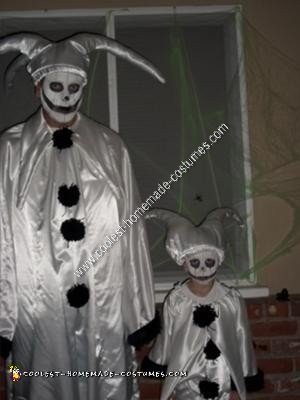 Luna Ghost from Scooby-Doo the movie. I used a Clown pattern and altered a jester hat many many times over. We ran into a 12 year old boy that knew who we were. Other than that everyone said a scary Jester. Guess not many people have seen the movie Scooby-Doo. Little one was sooo excited, … Read more 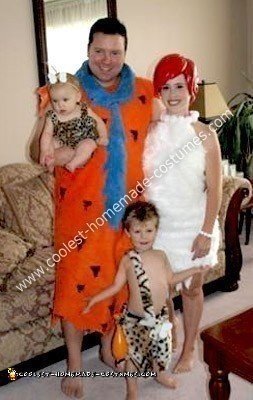 My husband made this Homemade Flintstone Family Costume for all of us. After seeing the prices of costumes in the stores, we decided that we would try to make them ourselves. Three hours later this is what we came up with. We’ve never had our picture taken so many times! 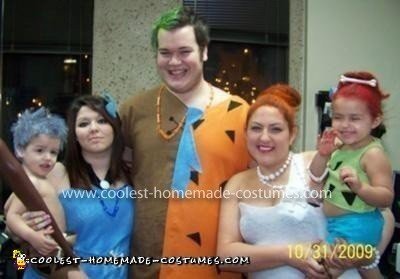 My best friend and I handmade this Homemade Flintstones Group Costume! I was Betty, my son was Bamm Bamm, my boyfriend was Barney / Fred, my best friend was Wilma and her daughter was Pebbles. We had so much fun making these costumes. We made all of them a week before Halloween and we had … Read more 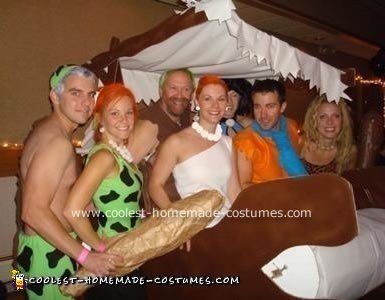 This year we decided to dress up at the Flintstones. Fred’s costume was made out of orange, black and blue fleece. It was sewn together and the tie was tied around his neck like a regular neck tie. Fred carried around a bowling ball… it was made out of a styrofoam ball and painted blue. … Read more 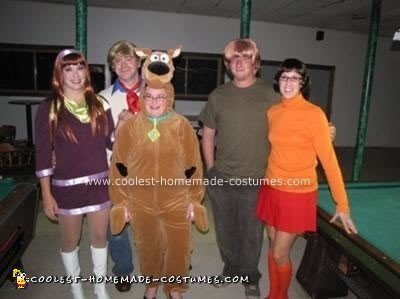 For Daphne – I bought the go-go boots and the wig on eBay. I got the dress at Target and shortened the hem and added the pink ribbon trim. Used left-over pink ribbon as a headband. I made the green ascot from material that I bought at Walmart. For Fred – Got the shirt and … Read more 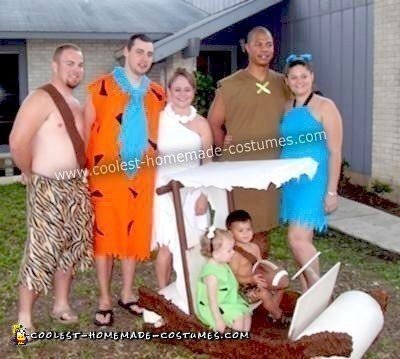 We decided this year to have a group Halloween theme. My friend, Christina, and I have toddlers 6 weeks apart and we thought it would be perfect to dress them up as Pebbles and Bam-Bam. Then we figured, the kids can’t do it alone! So, I designed, re-created and sewed seven costumes for the group. … Read more 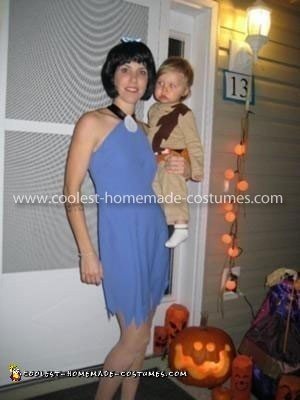 For my son’s 2nd Halloween we went as the Homemade Rubble Family Costume from the Flintstones. All 3 costumes were homemade, Barney, Betty and Bambam. I unfortunately cant find the photo of Barney but here are the other 2. Betty: I found a light blue dress at Value Village. I cut off the sleves and … Read more