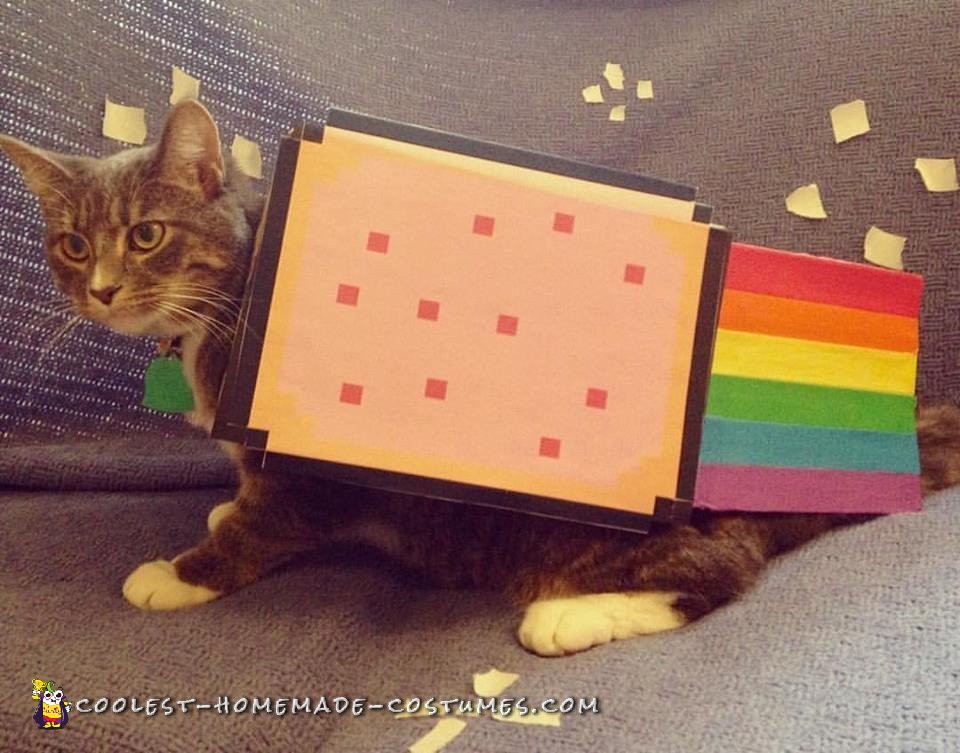 This is my kitten Artemis wearing this Nyan Cat costume (an internet meme for those unfamiliar)! The idea came from just wanting to have her resemble a famous internet cat, and it just so happened she is gray (and adorable) like Nyan Cat. This being her first Halloween with us, I wanted her to feel the love and joy that I do when it comes to this time of year (I don’t think she took that message from this process).

I used a cardboard box ($0.00) that was big enough for her to sit in easily, but not too huge that the box wouldn’t sit right on her body. Then I cut holes for her head and tail to stick out and flipped the box over. Then I just printed a poptart ($0.00) large enough to cover the box. For the rainbow tail, I used the scraps from the rest of the box. I cut a slit in the back for the rainbow piece ($0.00) and it fit right in and held the rainbow piece in place easily. I used colored tape that I had lying around, so it didn’t cost me, but if someone were to need the tape, they could easily get it from a craft store or someplace like Target or Walmart ($2.00-$4.00 per roll).

Overall it was a fairly simple costume to make; the hard part was getting her to wear it. We had to use lots of treats as a reward for her being such a patient kitty. When sharing her photo to friends and family, people thought it was a riot, and also very clever!

I was only able to really get two or three still photos of her in this, as she promptly decided to attack the box once she was tired of my antics. No amount of treats in the world would keep her patient enough after about 15 minutes of taking blurry photos. Fortunately though, she did get lots of love and attention and of course, treats for her trouble. I got a few good pictures regardless.