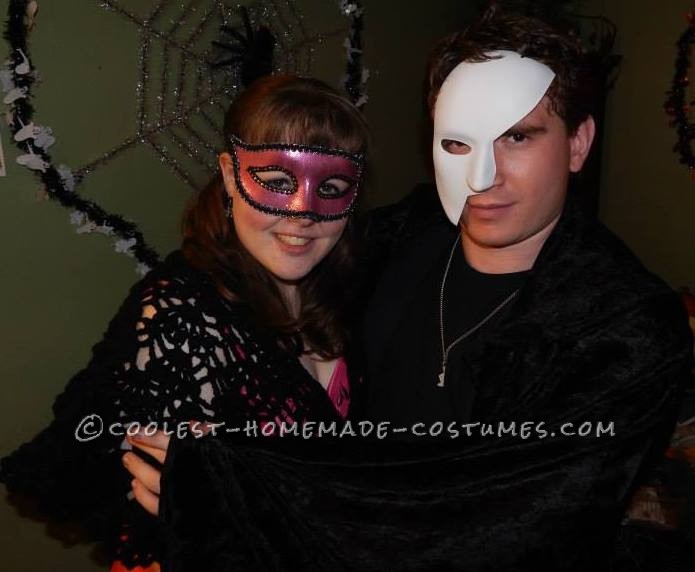 I decided to go as Christine Daae this year for Halloween to do a couples costume with my boyfriend as the Phantom of the Opera. Most people go for the “Descent into the Lair” or wedding dress costumes, but my favorite one from the stage production is the Aminta costume from “Point of No Return” scene.

To start off, I found a dress on Ebay that was pink silk prom style dress, with taffeta and silk under skirt and velvet roses printed across the dress.

Then I bought a pink and black lace mask, and long black opera gloves.

The hardest part of making my costume was actually the shawl to mimick the one the character wears in the play, and to cover up my arms from the dress being a spaghetti strap dress. I decided to crochet my shawl rather than buy one, to try a pattern I really liked and to have something home-made for my costume.

The pattern was a level higher of difficulty than what I was used to making, and it took me about three weeks to finish, but it was cool to learn the new pattern. When it was finished, I had a long, beautiful evening style shawl.

Then I added a nice pair of black stockings and high heeled boots, and a rose with a black ribbon tied around it to finish the clothes.

For the make-up, I found tutorials on youtube, but I mainly used a sparkly grey and grey/black mixture of eyeshadow, using the sparkly grey over the lid and crease and just under the eyebrows, and the darker grey and black blended together on the eyelid.

Then I added a medium line of eyeliner across the lash line, and some mascara to make my eyes pop out a bit more, especially since they were hidden behind the mask.

Finally, I took the top layer of my hair and separated it, then pinned it to either side of my head, then used a curling iron to curl those areas, and give other curls to the rest of my hair.

With my costume complete, I was able to go to a costume party with my boyfriend and people not only recognized who we were, but I got a lot of great compliments on how pretty I was and how amazing my hand-made shawl was!