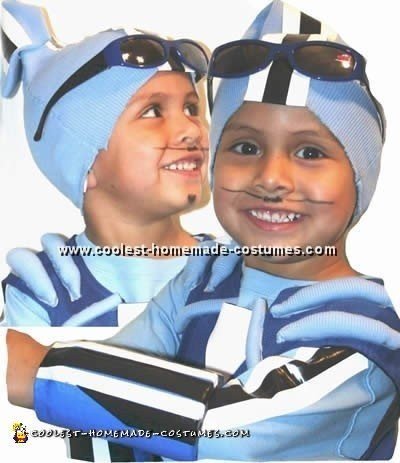 Here’s how this Sportacus costume came to life. I was never the typical grandma that you hear about on TV. My kids would always pick on me about it. You would not see me baking cookies on a Saturday afternoon. I decided that I wanted to do something for my grandchildren. Something they would remember me by whenever I was not around.

My grandson really liked the show Lazy Town. His favorite character was Sportacus so I decided to make him a Sportacus costume. I got a cheap outfit. Since it was summer I bought something light so he would be cool. I then bought painters tape, blue and black. I bought a blue scarf so I could make his hat which I also used to make the decorations on his shoulders and his chest.

The cuffs on his hands I actually got out of a box that was shipped to me. It was this long piece of Styrofoam that secured the item in the box. I cut it in half and put the painters tape on it.

Everything else is pretty obvious. I was able to make this Sportacus costume in a day. Not only was it an easy costume to make it was really inexpensive.

We bought our son a Spiderman costume, because that was what he wanted to be. Well a week later he decided he wanted to be his new favorite Super Hero Sportacus from Lazytown – NICK JR. Well since Lazytown is a new program from this summer, there were no costumes manufactured.

We told our son he couldn’t be Sportacus. We even bought his Build A Bear a Spidey character costume to help convince him to stick with his original idea.

He was OK with being wearing a Spiderman costume, but every time he went to play a game on Nick Jr. he would ask why he couldn’t wear a Sportacus costume and I’d explain that it was because they don’t sell it.

Well it was Oct. 29th and he got on the computer and once again asked why he couldn’t be Sportacus (He’s only 4). Well just then I figured if he wanted to be Sportacus that bad I was going to make it happen he is only going to be 4 once and the older he gets the more scarier and generic he is going to want to be.

I was going to make the Sportacus costume on my own. We went to Walmart and we bought a light blue/black girls wind Jacket and light blue Girls Flannel fleece pants (have you seen Sportacus on TV his clothes are tight). We purchased a boy’s white shirt with black sleeves. Also, I bought a Girls Ski hat and gloves the same color as the outfit.

Then I purchased Blue Painters tape, and Black electrical tape. I bought two Blue foam door crafts and blue string. I forgot to pick up white masking tape so I used white medical tape from my first aid kit (crafty I know). Next, I bought black pipe cleaners, and black felt letters.

First I cut the top of the hat off, then I made two blue stripes, one white stripe in the middle and two black on the outside of the blue. Then I took a piece of the blue string to tie the top to look like a nightcap. Next I cut the sleeves off of the jacket at about the biceps spot. I used all the colored tapes to make different patterns on the jacket and the sleeve cut offs.

I then spelled out Sportacus on the back of the Sportacus costume jacket, for anyone who couldn’t figure out the costume (which helped greatly). With the pants I put white tape on the inseam of the pants then used the three colors to make outlines on the pants, I also slit the bottom front of the pants and then put white tape as an outline.

I put tape on the gloves so his hands would be stylin’ as well as warm. Then I cut two ovals out of the blue foam and drew an ‘S’ on one for a belt buckle, and the number ’10’ on the other for a necklace. I cut a pipe cleaner in half and taped it on a piece of elastic string for a mustache.

And then I prayed that when he put on his Sportacus costume on it would all come together and look good. AND IT DID!! He looked awesome and just like Sportacus. It took me about 4 hours to complete this and the look on his face as he was running around in his new character costume was worth every minute of it. So that’s my story! PHEW!!!