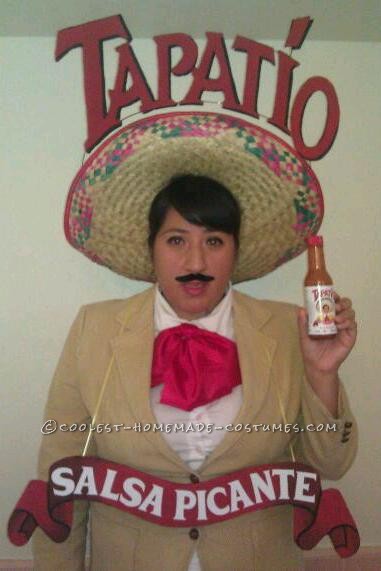 I love food. I love my Mexican-American heritage. But above all, I love humor.  In keeping with my theme of modeling my yearly Halloween costume after an inanimate object, Ipod and a piece a sushi to name a few, I had been searching for a good idea. Then, late last month while in the lunch room at work, my co worker looked over to me and said “We’re out of Tapatio again.”  I promised him I’d pick up a bottle on my way to work the next day and left it at that.  While at the Latino supermarket the next morning, I discovered something I’d never known! Tapatio hot sauce comes in an array of different sized bottles ranging from small (a few ounces) to extra large (nearly a quart)!  It was then that I realized I’d taken mister Tapatio for granted my entire life, having always been a staple on our kitchen table, I had grossly underestimated his popularity. As I walked the extra large bottle to the register, I locked eyes with the goofy, glaze faced male character on the bottle and knew it was destiny. I have attempted to pay homage and recreate that same goofy, glazed smile in my photo.