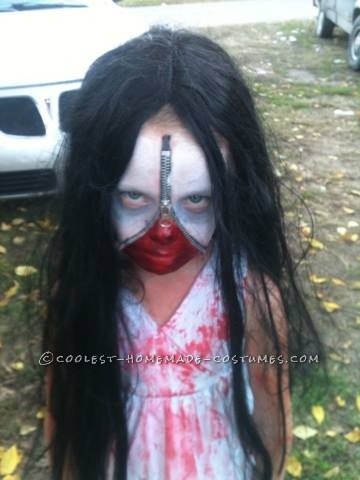 My 7 year old niece came to me telling me she wanted to be Bloody Mary for Halloween.  I’m the Halloween fanatic in the family, so costumes are often left up to me, as I simply loathe store bought costumes.  When coming up with ideas, I quickly realized the Bloody Mary is more of a concept. There’s not an actually “look”.  She’s simply a “scary looking lady” that kids see in the mirror and it’s been interpreted in a million different ways.

So, with that in mind, we set out to come up with our own interpretation.  I started by taking the zipper off an old jacket.  We glued that down the middle of her face using spirit gum, which can be bought anywhere that sells Halloween costumes/makeup.  Next, I simply dabbed white face paint above the zipper and added a little darkness around her eyes to give her more of a ‘dead’ look.  Next, I took some store bought fake blood and mixed it with baby powder to make it thicker.  I then globbed it below the zipper.  Presto, we had an unzipped face….which turned out fantastic.  To finish up, I simply dug an old black wig out of my Halloween box that I keep year after year and used that.  I found an old white nightgown and smeared it with blood.  Put this all together and you have one very scary looking little girl.  My niece LOVED IT!!

Fast forward to the Halloween party that we dressed her up for… the other children were horrified of her.  A few of the parents were actually mad that she was so scary.  It didn’t help that she practiced her ‘scary stare’ before we left the house and had it down pat.  So, she walked around the room slow and creepy, with her head slightly tilted, just staring at people.  She didn’t say a word.  It was FABULOUS!!!  And to think, we did it all for around $7.00. 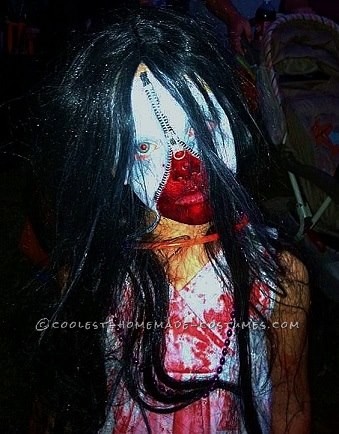 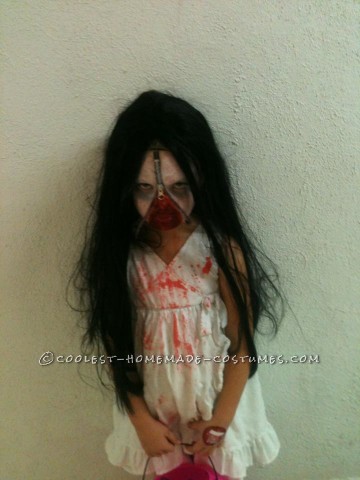 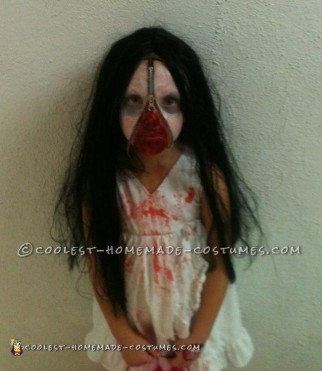 Grotesque Zombie Costume with Bloody Stomach and a Zipper Face