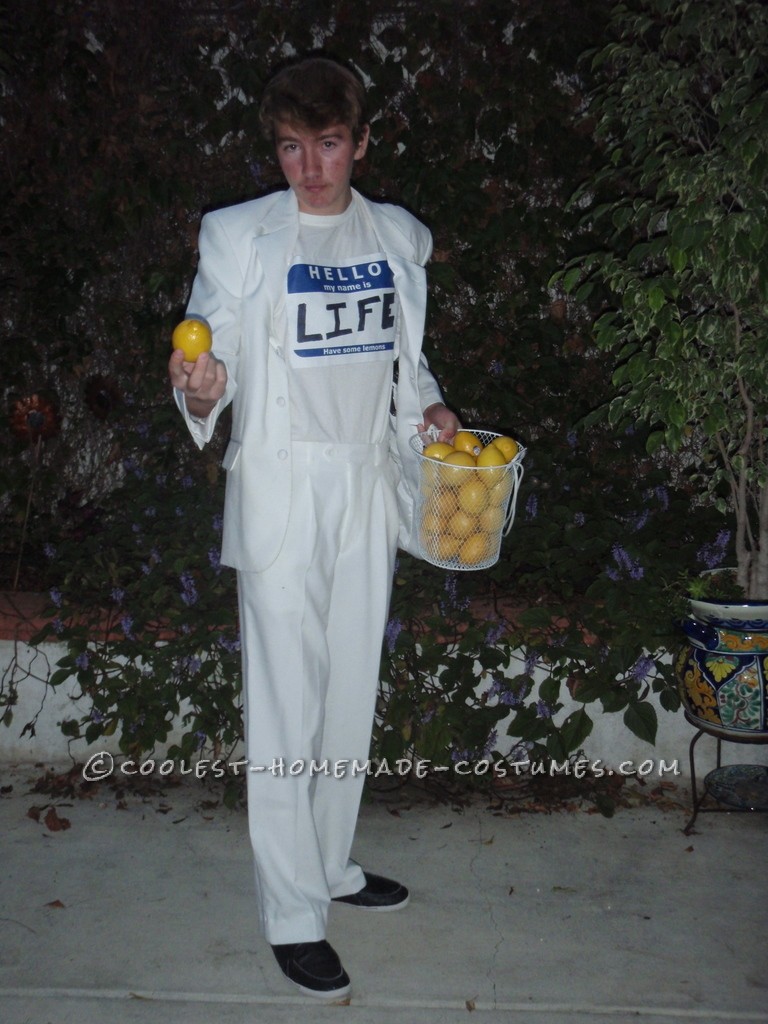 Every Halloween, I try to think of a great pun-based costume. This year I thought of “When Life gives you Lemons…” Everyone knows the classic expression, but what if I were to take it literally? Thus I became Life, and handed out lemons.

For my costume, I wore a white t-shirt, and a white suit that I had picked up at a garage sale for really cheap. On my computer, I made some custom name tags, that said “HELLO / my name is… / Life / have some lemons”. Then I got a metal mesh white trash can, and bought some lemons to put in it.  I also got some sunglasses which I wore when I was outside. I stitched one of the custom name tags to the front of my t-shirt, and the other to the back of my suit jacket. Then I was all ready.

I wore my costume to school, and the reaction was immediate…everyone was very impressed at the originality and creativity. I’d walk through the hallways and hear people say “Look there’s Life!” It was cool to listen to some people try to figure it out. They’d finally put all the pieces together, and burst into laughter. A lot of people took photos, and told their friends. Before I knew it, everyone was asking for lemons, because they wanted to be able to say that Life had actually given them lemons.

Word sure did get out quick though. I was sitting with my friends at lunch, when another one of our friends walked up to sit with us. I was sitting off to the side a bit, so she didn’t see me. One of my friends asked her if Life had given her a lemon, and disappointedly, she said “no…” Then I jumped up from were I was, and said “Hello, my name is Life, Would you like a lemon?” She excitedly freaked out, and said “That was you…you’re Life, my friends told me about this, I can’t believe it was you! That’s so cool!”

All throughout school, I handed out lemons at random, but the one mistake I made, was in not purchasing enough lemons. Once word got out about my costume, everyone wanted a lemon, and I didn’t have enough lemons to give to everyone. So unfortunately, not everyone got a lemon from Life.  Aside from that, everyone loved the costume, and I’m really glad that I decided to go as Life for Halloween. 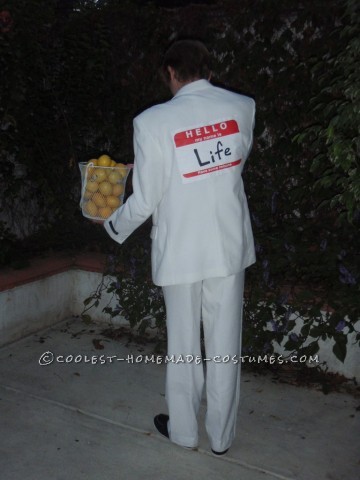 A Punny Brush with Death Costume

Can You Figure Out My Homemade Costume?