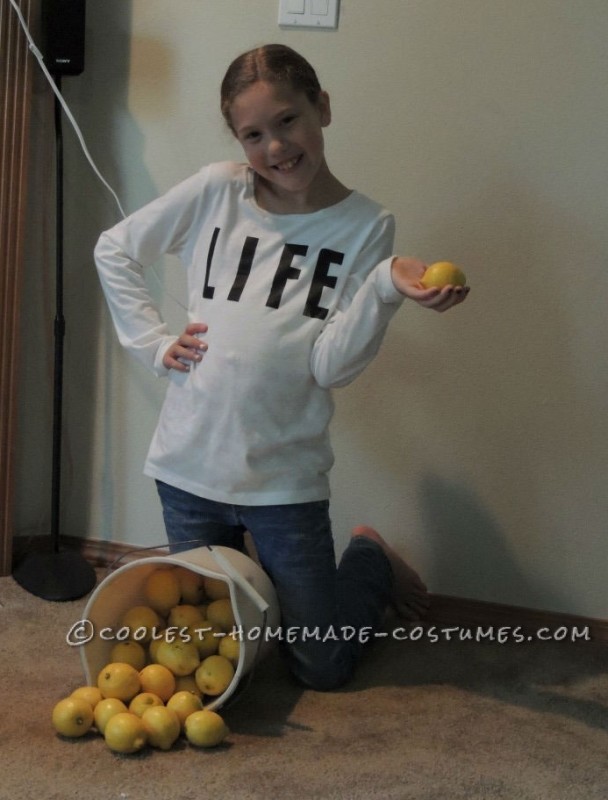 We like to think out of the box when it comes to Halloween and Costumes. A play on words, a simple household item turned into a costume, or just plain being silly. My oldest daughter has an awesome sense of humor and gets into the fun every year. She wanted something sarcastic, easy, and lots of fun. We decided she would  just be life and hand out lemons.

The reactions were a mix of laughs, remarks about how original it was, and those that didn’t get it until they asked. She never said a word though when asked. She just pointed at her shirt and handed them a lemon.

The costume is simply a white shirt, iron on letters, a yellow bucket (spray painted bucket if need be), and a bag or two of lemons. We got a basic white shirt from the store for $5, and ironed on the letters LIFE. The iron letters can be found at the craft store. We paid about $6 for the four. We spray painted a bucket we already had yellow and bought a bag of lemons from the grocery store for $3.

The picture shows the white bucket before we decided to splash yellow paint on it. 15 minutes from start to finish and we were rolling out the door. It also cost us less than $15 using the supplies we had on hand. On the plus side we had lemons at the end to use for cooking and around the house.

There was some confusion as people stared at her and tried very hard to figure out who or what she was exactly. It was fun watching the reactions. The fact that she never spoke about it,  just handed them a lemon after pointing to her shirt made it more fun. Lots of laughs were had when people figured it out though.

Overall the low cost, ease of assembly, and fun factor made this one of the best costumes we have made.