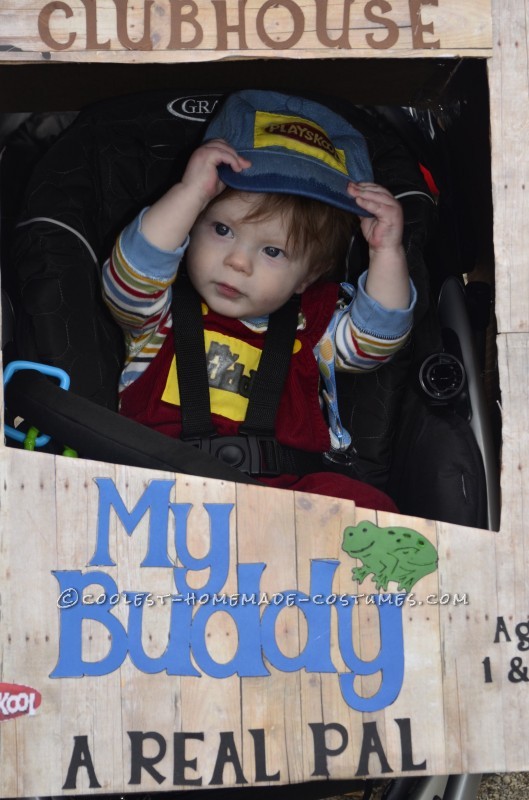 After searching the web for an original costume for my 7 month old son, I stumbled over a picture of a child dressed as “chucky”.  I found that “Chucky” and the “My Buddy Doll” from the 80’s were eerily similar.  Since we always call my son “Buddy” and he looks like a baby doll we decided that this would be the perfect costume for him!

The costume itself was easy enough to make but it took a lot of searching to find each individual piece of clothing.  After finding the overalls and a denim hat we transferred images onto iron on transfer paper and then sewed the image onto yellow fabric.  I also found yellow buttons and sewed them to the overalls so that the costume was a little more authentic.  The first time we took him out in his costume we didn’t get a reaction so I decided to make a box to go over the stroller.  It was relatively simple to make and I was able to complete the project in about 4 hours.

I took a cardboard box and cut it out to fit over the stroller.  I then cut out the openings and reinforced with packing tape.  Following this I covered the box with scrapbook paper and then used my Criut to cut out all of the wording.  We took him to a local amusement park the following day and were getting compliments before we even entered the park.  Everybody was stopping to take pictures and comment on how unique the Buddy Doll costume for baby and stroller was.  It was also great because it was windy and chilly and the box protected my son from the cold!