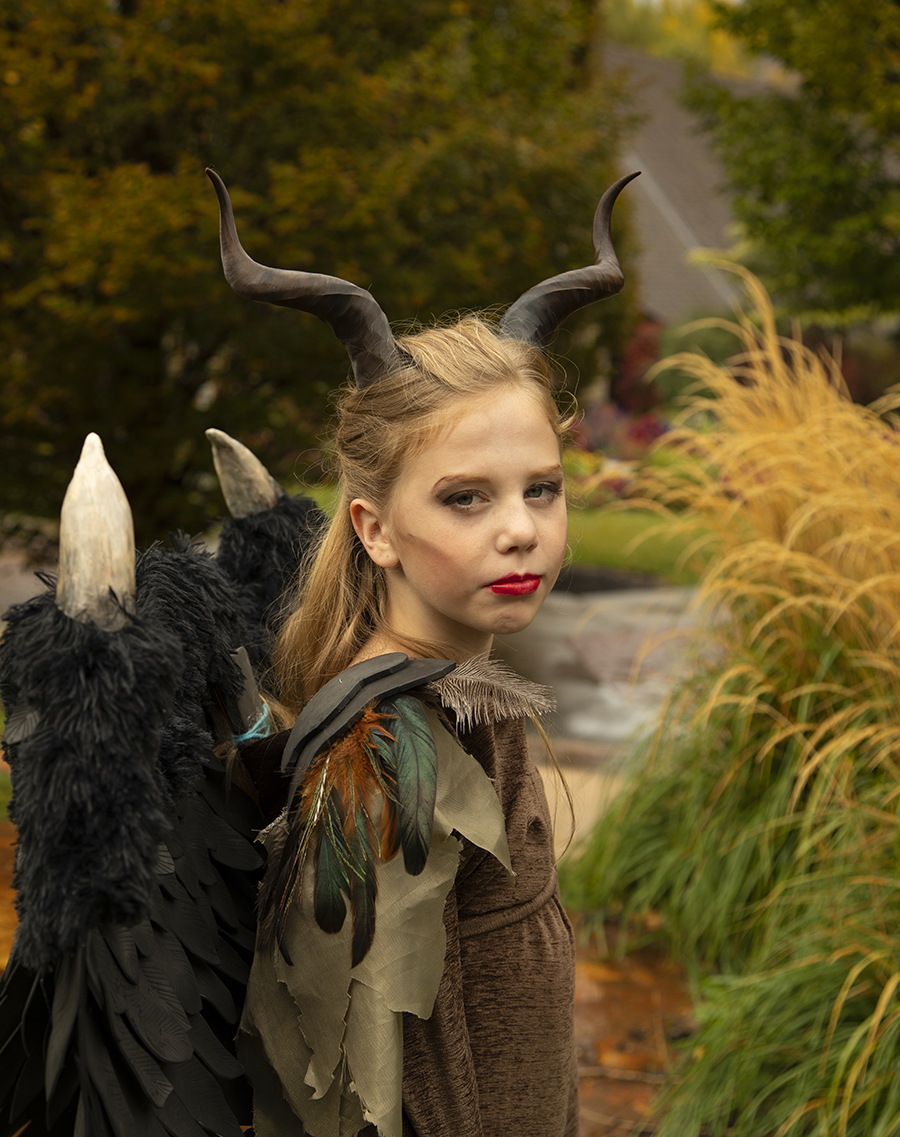 After a lot of searching online, I decided to make the long-sleeved brown dress to keep her warm for trick-or-treating. To start, we went to a thrift store, as we always do for our Halloween costumes. I was able to find two large curtain panels in a velvety brown fabric that I knew I could use to make a the dress. Luckily, that is a pretty simple shape so no pattern other than my daughter laying on the floor, was needed.

Then I searched for pictures of her wings. Maleficent’s wings are huge! We decided on a slightly smaller scale for convenience and comfort, but still big enough to be recognizable. I would have liked to use real feathers to make the wings super realistic, but I wanted to keep them budget friendly, and spending a couple hundred dollars on a costume did not fit the bill.

So I went with the costume maker’s best friend, craft foam. It is light, moldable, paintable, and relatively cheap. I used craft paper to get the size and shape right for her body and then I used it as my pattern to cut out feathers. There are a LOT of feathers. Two wings means four separate sides, which equals many many feathers. Each feather in turn, got cut out, scored to look more feather-like and then hit with a heat gun to open the scored cuts and give them a sheen.

After was done, and the feathers were all glued in place with contact cement (not hot glue) I had to figure out an armature that would hold them to her back. I’ve done wings before, but those were always light, small fairy wings. These are not the same animal. I went to the local hardware store and got the heaviest copper wire I could bend.

I made the wire follow the top of the wings and then loop down her back. I then used pieces of thicker foam mats to give more support under the wire parts of the wings and to pad against her back, using more glue and duct tape. The top of maleficent’s wings needed to look like smaller softer feathers so I found a soft feather-like faux fur at the fabric store and then glued it over my wire and foam contraption. I glued more foam feathers into the faux fur to help the transition look less abrupt.

The crowing point of the wings are the horns. I used a couple layers of foam glued together, and then molded clay over that to get the right shape. Then I painted the horns to look like bone. To hold the wings on to my daughter’s body, I got a stretchy exercise belt that kind of looks like a corset. It turned out not to be enough though.

After she wore the homemade Maleficent costume to take some photos we found out that the wings were still to heavy and kept pulling backward. I ended up making a long, skinny pocket for the “back pad” to slide in to, then attaching straps that could cross her chest and velcro around her waist. Then we put the exercise belt over the top of that and the dress over everything. That was the solution that worked.

At that point, I just wanted an easy solution for the horns for her head. Enter Etsy. I found a seller that could make them with their 3D printer. Yay! All they needed were a headband to be attached to and some paint to mimic ridges on a horn.

When all was said and done, she loved the reactions she got to her homemade Maleficent costume and liked sashaying around with a massive pair of wings. It was a lot of work, but always worth it in the end.