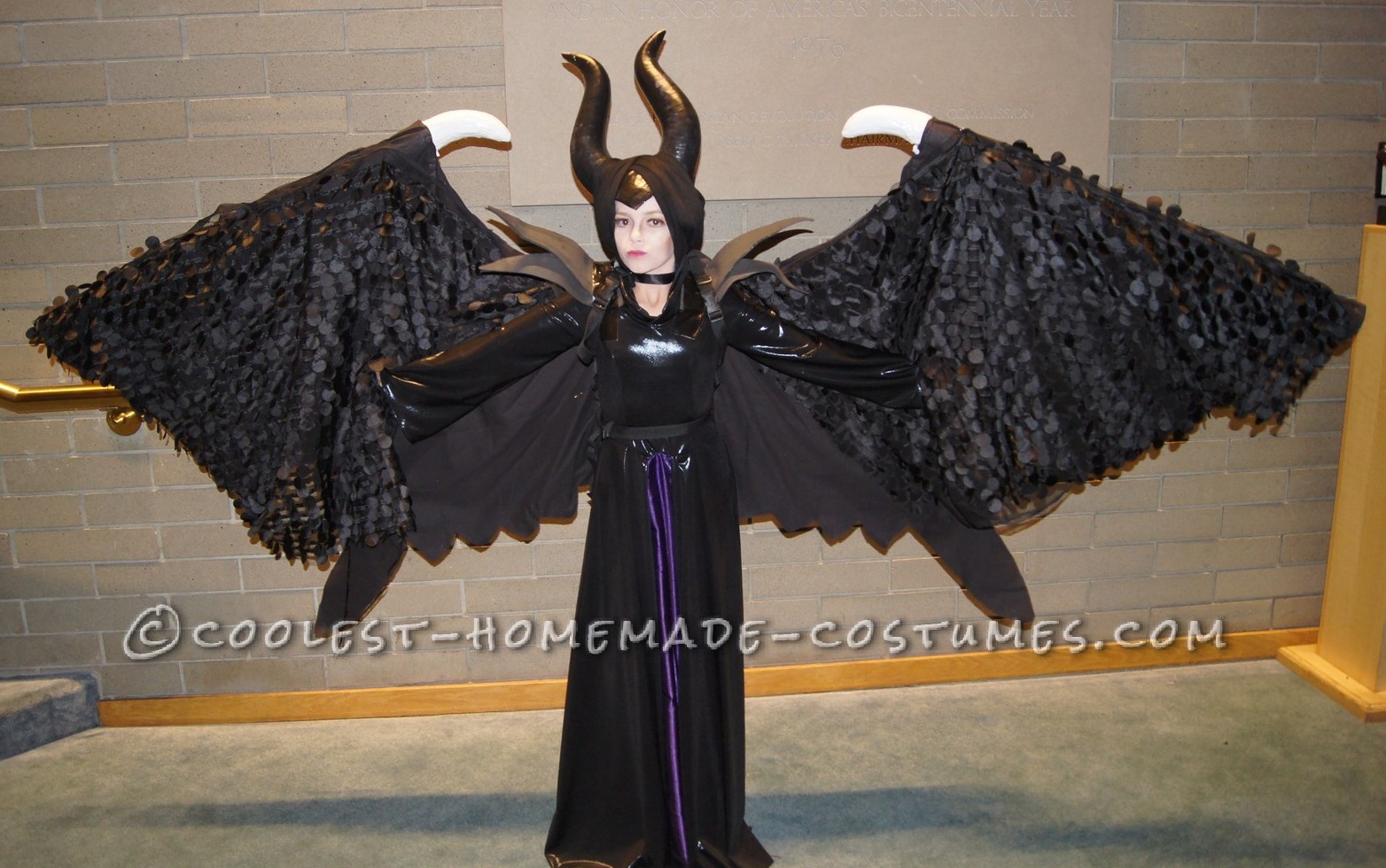 Like many of you, we were excited to see Disney’s new movie Maleficent this summer. We loved the effects and costuming of the movie. Our family has always loved Halloween, and every year we have a fun family tradition of making our own DIY Halloween costumes. Our oldest teenage daughter has a real interest in fashion design and was inspired by Angelina Jolie’s character and look of Maleficent. She wanted to fashion a Halloween costume after Maleficent. My husband decided to help her build a Maleficent costume, specifically the helmet and wings that would be unlike any to be found. The wings in the movie were so magnificent and critical to the story line, that his imagination and creativity were immediately sparked.

My husband started creating the costume with Maleficent’s helmet. He took a balloon, blew it up to approximately the same size as our daughter’s head. He then put many layers of paper mache to form a round ball. He then cut out the bottom to create the base for the helmet. Next, he took two pieces of Styrofoam and with a heat cutting tool, he sculpted the curves and details for the horns. He realized the Styrofoam was a delicate medium and wanted to make it more durable, so he covered them in drywall mud. He then placed the horns on the helmet and attached them using more paper mache and drywall mud. After letting it dry, he spray painted the entire thing black. We then added duct tape and electrical tape over the base of the helmet and the horns to give it a more realistic and textured look. When it was time to wear the helmet, my daughter wrapped a black scarf around her head and the horns to further secure it to her head. It was a very impressive headdress with details that really stood out.

The next critical part of the costume were the wings. We didn’t feel we could settle with just little fairy type wings, we needed something much more dramatic and impressive to go along with Maleficent’s personality. My husband is an architect and has a very creative mind and decided to build wings that could open and close. He and his father came up with a design using an aluminum rib system that could extend out to create a nine foot wing span, and then retract back in when the wings were closed, without being too heavy for a child to open and close. They attached these aluminum braces to a piece of plywood that would be attached like a backpack onto my daughter. It utilized screws and nut hinges that could allow for the flexibility to be opened and closed using a bracket placed near her fingers. They then attached a three foot cardboard tube to the end of each wing that formed the outside edge of the wing. Onto that tube, he placed a Styrofoam “talon” on top, which would show up whether the wings were extended or retracted back in. We attached black fabric to the front and back of the wings using hot glue to secure it. We then covered the black fabric with a different fabric that had 1″ circle cut flaps over the whole fabric. I chose this fabric to represent the feathers on her wings, they were very impressive and gave a great textured look to the wings as they moved. We attached black straps to the board on her shoulders and one around her waist to secure the wings to her body. The wings probably weighed about 10 pounds. One of the most impressive features of this costume is that our daughter is very petite, about 4’4″ and it was quite a sight to see this “little girl” wearing these massive wings that unfolded to twice her size.

My husband and daughter decided to include Maleficent’s staff as well for the full effect. He hunted down a large branch from a nearby forest to use. He attached a clear plastic honey container that he melted into a unique shape and attached it to the top of the staff using hot glue and pieces of cardboard strips wrapped around it. Inside the plastic container, he put green battery operated LED lights to give the green glowing effect of her staff, which could be turned off or on as needed.

The dress and makeup were the last details that had to come together to finish the whole look. As mentioned before, my daughter is very interested in fashion design, so we took this opportunity for her to learn about sewing a dress. She was very involved in choosing the pattern, fabric and the sewing of it. It was a great learning experience for her to see how clothes and costumes are made. My husband wanted to add a much more impressive collar that the dress pattern had, so he cut “collars” out of black foam and inserted a coat hanger in between the layers of foam to produce a flexible piece. He then duct taped the collars to the dress to add the dramatic feel to the costume.

The makeup was all done by my daughter, she put a pale foundation on and used bronzing powder to highlight and create exaggerated cheek bones. She applied false eyelashes and eye shadow to make her eyes more dramatic. This whole process took many, many hours as using the paper mache and drywall mud took a lot of time to work on and allow for drying time. It was a fun family project and one that my daughter and husband were especially proud of.

She wore this costume to a local cultural costume contest where she won first place. As mentioned before, with these magnificent wings were an amazing mix with her petite frame. Hundreds of people walked by and commented how incredible she looked and wanted to take their picture with her. She is an aspiring actress and played the part of Maleficent exactly, with a snobby distant look and feel. We had many people ask how we built the wings and if they could try opening them.
We are grateful for this opportunity to share our creation and hard work with you, and all those following on your website. This was a great opportunity for my daughter and husband to create something together, to learn new skills and to spend time together making a lasting memory. I hope you will consider this submission a contender for an award, as a way to congratulate them on their hard work. 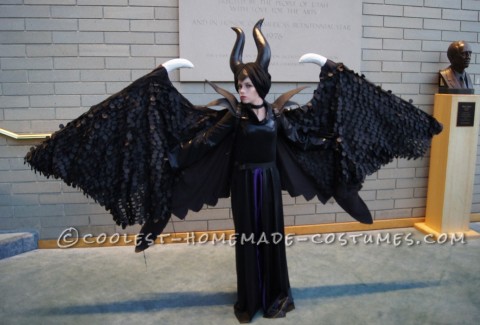 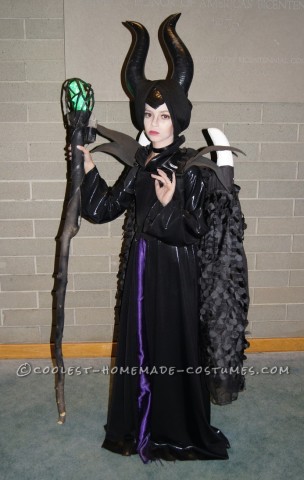 Original Costume for a Girl: The Other Maleficent