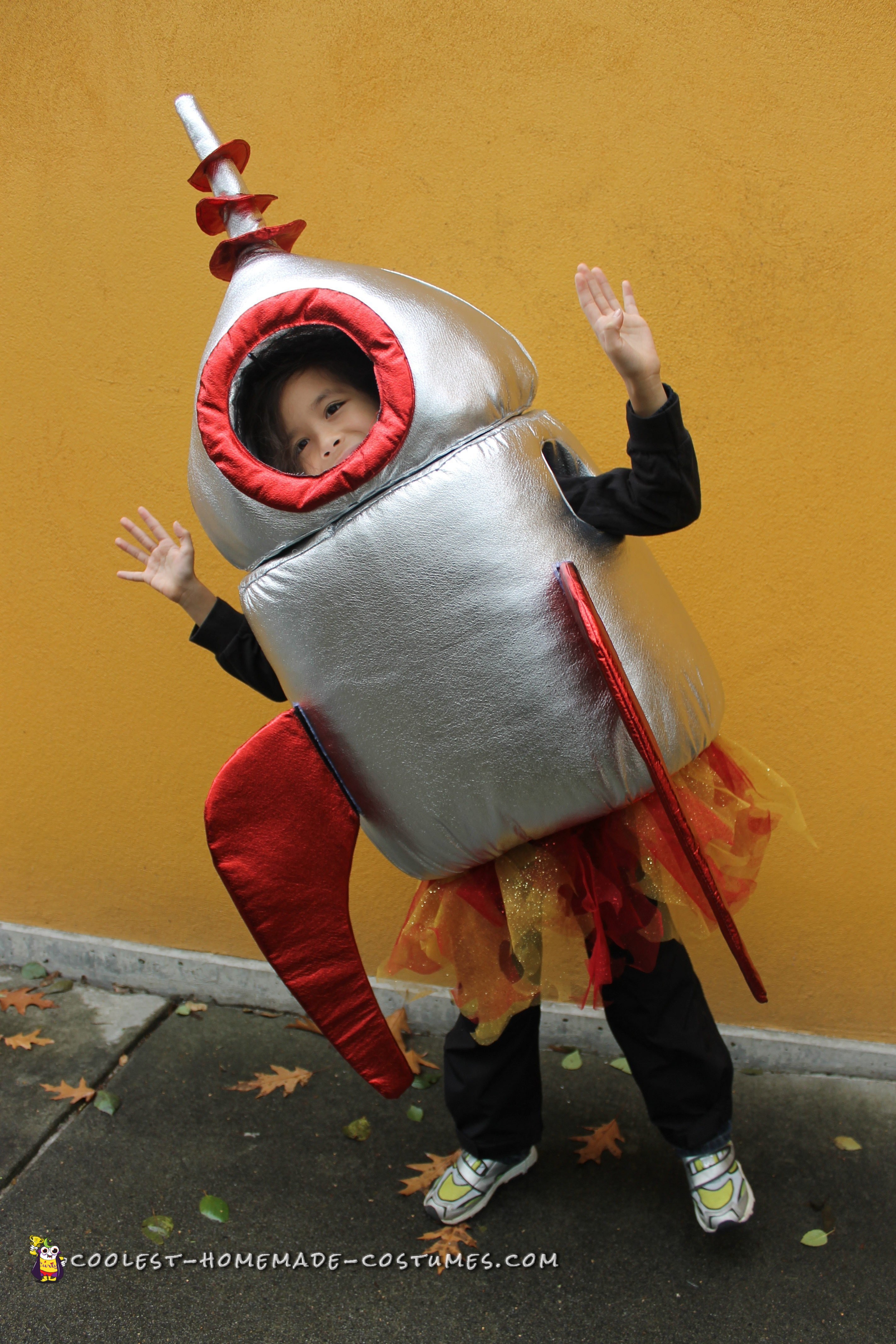 When my kids pick their costume I just ask a few favors—don’t choose anything I can just easily buy in a store, or anything monotone (it takes me so long to make them I would go crazy without a little variety) and chose something that gives you joy! This rocket fit all of those things.

The rocket is made from Styrofoam, fabric, batting, and battery operated lights.  Probably the trickiest part of making this costume was creating the base structure.  I wanted something light weight but that could also keep its form. I decided to try Styrofoam. So, I soon learned that Styrofoam doesn’t come in large enough pieces to suit my design idea so I had to buy several smaller pieces and glue them together to form a large slab.  In order to carve this slab down to a suitable shape and size I used a gourd scrapper. It worked quite well. The 50’s rocket shape I was going for quickly took form but my kitchen (and many other parts of my house) was covered with what seemed to be magnetic round balls of Styrofoam debris. It was like January indoors.

Once I had carved the piece for the body I cut it into two halves so that it could open in the back to make it easier to put on. For the outside I bought some very thick and durable metallic red and silver fabric. However, by holding the silver fabric to the Styrofoam I could tell that the numerous bumps on the surface of the body would show through.  To remedy this problem I glued a thick layer of foam batting onto the Styrofoam and placed the fabric on top of that. The fabric for the rocket was seamed together with a machine when possible and otherwise hand sewn.  To the interior of the rocket I glued a grey jersey fabric directly to the Styrofoam for comfort and protection so the Styrofoam wouldn’t wear away.

At the bottom of the costume I sewed on red and gold mesh fabric which was covered in glitter. I cut this fabric to look like flames swirling with energy and to imitate the blast off of rocket going into space.

The red fins for the rocket where made from a thin piece of Styrofoam. The fabric was both machine and hand sewn onto these pieces.  I then attached a piece of Velcro to the place where the fins met the body of the rocket—so both the fins and the body of the rocket held opposite parts of the Velcro. I did this because I was worried that if I attached the fins in a more permanent and unyielding way—they would break off the first time someone swiped past too quickly or roughly.  This design worked great, the fins just sort of folded towards the rocket if they were pressed upon and it also made it easier to store out of the way once we removed the fins.

The head of the rocket was made like the body, carved from Styrofoam and smoothed out with batting. I added the red circle disks to the nose of the rocket for detail as well as using the same metallic red fabric to frame the opening for the face.

When I originally cut the body into halves I was worried that a crease would form in the front of the rocket where the pieced had to move together, surprisingly the batting must have been enough to prevent this because you couldn’t tell that it wasn’t still one piece.

The head of the rocket and the body were attached using Velcro which lined up once everything was put in place. I first sewed the Velcro on using a curved needled then I glued along the seams for extra protection.

For the piece de resistance, I added battery operated lights which could be set to either regular light or to strobe. I sewed these lights in using just basic thread.  Around the face I chose a white light that would make my son really look like he was inside a rocket. On the bottom I sewed a combination of 3 colors or orange, red, and yellow which we set to strobe so it would look like he was taking off.

The battery packs for these lights were secured with elastic bands that were sewn and glued to the inside of the body and head piece.

We went trick or treating twice on Halloween. My son got loads of attention in the early part of the day. I saw grown men stop to marvel at him. I even overheard one say, “My mom never made me a rocket!” I mention the men because even thought the costume got an equal amount of attention from women and children as well–it is a great thing to see a grown man go to his place of joy.

However, when the skies turned dark the costume admiration went to the next level. People were freaking out. As his little face glowed like an astronaut peeking out into space and the fire beneath him lit up in the flashing light—people stopped him left and right to ask him questions and to take pictures. 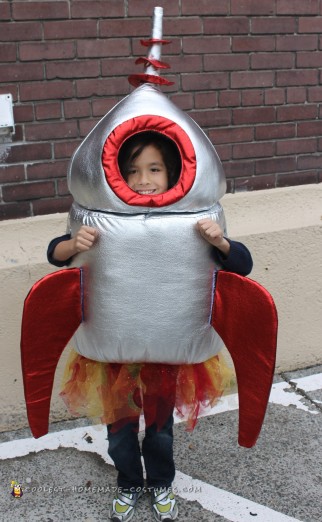 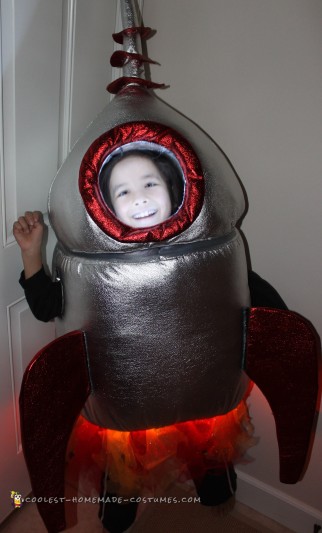