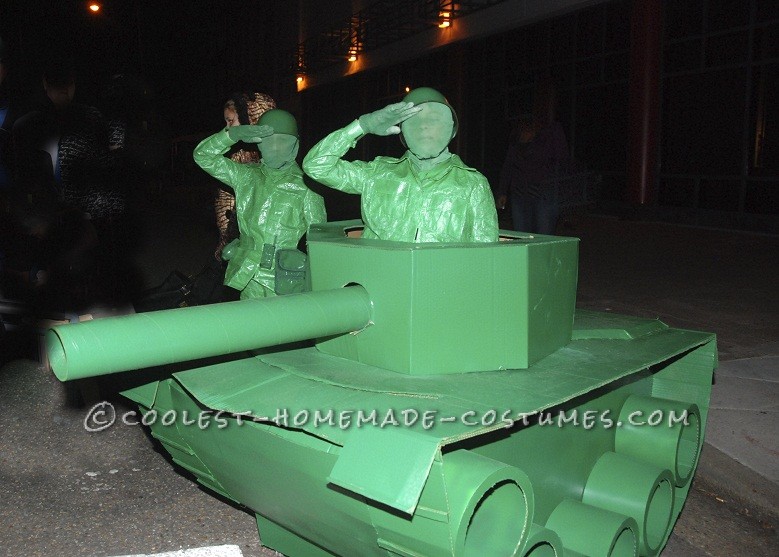 My sister and I are best friends, so when our sons were born only three days apart, we knew they would be close. Although they have very different personalities, the boys like to do as much as possible together. My family loves Halloween, and we like to make our own costumes. The boys were nine this Halloween, and we were struggling with an idea that wasn’t too gory, cute, or young. One day, during a family barbeque, the boys announced that they had the “perfect idea” for a costume. They wanted to be green army men. The boys always dress as a pair for Halloween, and creating this costume quickly became a family affair that included me, my husband, sister, brother-in-law, and parents.

Our first task was to decide how to make them similar but not identical. We wanted a very plastic look to the costume to mimic the toy. My mom decided to use plastic tarps to create the clothing. We painted the tarps green, and Mom sewed the outfits. She used a semi-sheer cloth to cover their faces so they, like the toys, would be fairly featureless. We sprayed cardboard and glued it to Blake’s boots to create the base on which the toy army men stand. We also sprayed his boots to match the costume. Mom used a belt to attach the grenades, canteen, and walkie- talkie, and a pouch she made out of cloth.  The only store bought components were the grenades, canteen, walkie-talkie, and helmets, which we painted to match the rest of the outfit.

We decided to create a tank for Braedon so that he would not look exactly like Blake. My sister, husband, brother-in-law, and I wanted a large tank so he would look like he was riding in it, rather than wearing it. Together, along with the two boys, we started by building a cube using PVC pipes and a lot of Duct Tape. We bought swivel bearing casters so the tank would roll, and Braedon wouldn’t have to try to carry it. We then cut refrigerator boxes to make the basic shape of the tank. Once we had the basic shape, we cut and glued small pieces to make the tread. To make the multiple tires in the tread, we used a box cutter to cut the center out of circular cake boards. We then glued the circles to poster board, creating a 3D effect. We created the top piece of the tank by folding a piece of cardboard. To make the heavy cardboard fold without creasing, we used a box cutter to shave the inside of the folds. To construct the barrel of the tank, we used a cardboard carpet roll. Since it was so heavy, we used fishing line to tie the barrel to the lowest PVC pipe so it would not lean downward. Once the tank was finished, we let the boys spray it green to match their outfits.

The boys went to several Halloween events in this costume. They were the center of attention everywhere we went. So many people took pictures that we had a hard time moving from one place to the next! But, the boys LOVED the attention. They saluted for each picture, high-fived admiring children, and gave details about the construction of the costume to interested people. We all had such a great time making this costume and showing off our work that we are already thinking about what we are going to make next year! 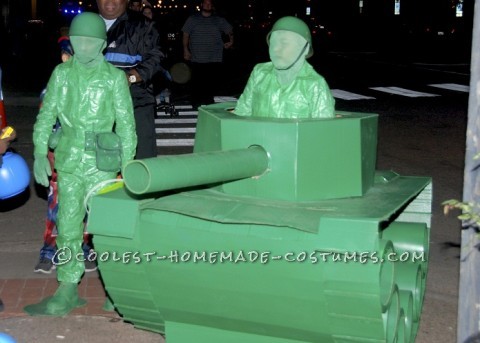 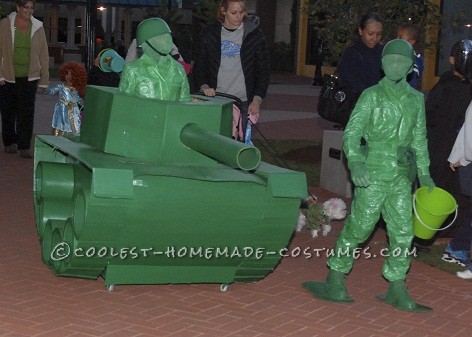