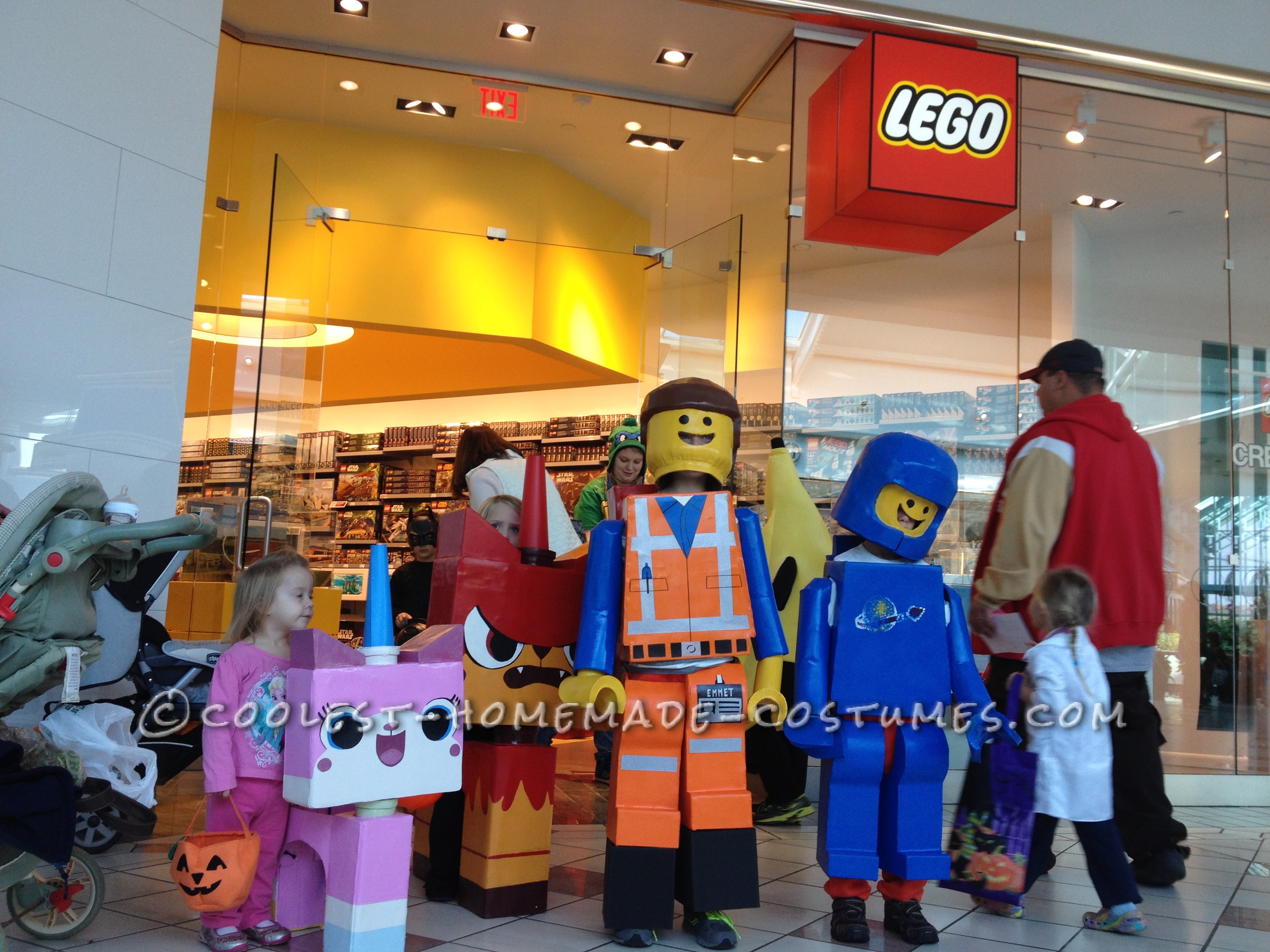 My two daughters, Audrey and Natalie, are very close with their two cousins, Emmitt & Derek. They play (and fight) together all the time. For at least the last couple of years, they have built and destroyed (each other’s) countless Lego creations. When The Lego Movie came out, that’s all they talked about.

They quickly each took a liking to their favorite character. Emmitt chose Emmet for obvious reasons. Derek chose Benny, mainly because he’s just a funny spaceship guy. When it came down to choosing Halloween costumes, Audrey and Natalie both chose Unikitty, which caused immediate problems. Eventually they somehow agreed that Audrey would be angry Unikitty, and Natalie would be happy Unikitty. I have a tendency to never turn away from a creative challenge, so when the kids came to me with their ideas, I instantly started brainstorming.

I didn’t have a big budget, and coincidentally had a lot of cardboard and paint in the basement, so that’s where I started.  I borrowed the kids’ toys to make sure I measured for the right proportions. I got all the kids together and took their measurements.  I sketched out the costumes and did a lot of math to see what would look the best and fit the kids at the same time. Then, the building started.

First, I gathered as much cardboard as I could find. Luckily, we stored a lot of flattened boxes in our basement for some unknown reason. Just cutting the shapes out took a few days. I had a roll of duct tape, and I started taping the shapes together to build the three dimensions. About half way into taping, I noticed some of the tape was starting to peel away. Before long, the costume body parts started to fall apart! I looked around for other options, and found a hot glue gun with a handful of hot glue sticks. I figured this would be pretty much all I needed. I was so very, very wrong. Not that I want to jump ahead in the process, but in the end, I used just about 120 sticks of hot glue! I also burned the tips of my fingers quite a few times. However, hot glue does indeed hold cardboard together much better than duct tape for long term applications. The most difficult aspect of working with cardboard was building the rounded shapes for Benny’s helmet and Emmet’s hair. A lot of tiny pieces were needed to mimic a smooth solid shape.

The second part of the process was creating the claw hands and smoothing out the corners and surfaces. I decided to go with EVA foam. This was great for the claw hands, because the boys could hold on to their candy bags due to them being flexible enough. Since I wanted to be consistent in texture, I covered all the cardboard with foam as well. This part took much longer than anticipated, and still left some cracks to fill. I tried filling them with calk, but I quickly started running out of time! There came a point where I realized I needed to make some sacrifices in terms of quality if I wanted the kids to have completed costumes for Halloween. I grabbed some transparency paper from my arts and crafts bin in the basement, and rolled them to make the horns for the Unikitty costumes. I bought a couple round push-button lights, and glued them on the tops of the heads so the horns could light up at night. It was a nice way to keep track of them!

Painting was the next part of the creation process, and also the most satisfying. This is where the characters really started coming to life. I got a bunch of paint samples from the local home improvement store and went to town. This was actually the quickest part. I’m fairly artistic, so painting is second nature. It was the arts and crafts part that threw me off.

I have to say, There is something about adding a face to a costume that instantly turns it into some thing else entirely. It was strange to be up into the early morning while the costumes were staring at me. Your mind starts playing tricks on you when you are that sleep deprived. I had to cover them up so I didn’t feel their eyes looking at me while I fell asleep on the floor. After the colors were dry, I finished them off with a light coat of gloss spray paint to make them shine. I started in my basement, which was a bad idea. The entire house smelled like spray paint for a few hours. I moved them into the garage, and let them sit for a few days until the smell dissipated.

Throughout the process, the kids had some constructive criticisms while trying them on for size.  “Daddy, Legos aren’t made from cardboard.” That was a comment made more than once. Another classic critique was, “Uncle Dennis, Legos aren’t supposed to be this big.”

When we headed over to various Halloween events it was a lot more rewarding. We went to the mall to trick-or-treat around the different stores, and they were treated like rock stars! Kids would come up to them and smile just to get a chance to touch one of the Lego characters! Some of the older kids and adults made it a point to get some snapshots with their phones before we got away. All four of them were soaking up the attention and loving every minute of it, which is what it’s all about!

I had a few people come up and ask if they were homemade, which was rewarding. I suppose if there’s any question to whether or not they were professionally done, you didn’t do half bad! The best reactions were actually on Halloween night. The Unikitty costumes had horns that lit up from inside, and that’s just cool to see walking up to your house! It wasn’t really possible to fit them all at once on any normal sized front doorstep, but it was awesome to see people watch them come one after the other. Usually they were impressed with just the first one. By the time all four came to visit, they definitely had astonished looks on their faces. It was a little rainy and cold this Halloween, so I think all the nice comments and smiles gave a little motivation for the kids to keep going!

I learned a lot from building these costumes. The biggest lesson I learned was the importance of quality time with your kids. You don’t realize how busy you are until you try and wedge a giant project in the middle of your schedule! The biggest part of time management for me was balancing the time I had with my two girls. I spent at least a few sleepless nights with hot glue and cardboard, just so I could spend time with them when I got home from work. I wouldn’t work on the projects when they were awake. I just wanted to spend the time with them while I could.

Also, it didn’t help that my wife works nights. We are usually lucky to give each other a quick high five as I come home and she leaves for work. To be honest, I tried working on the costumes the first couple days. I gave the girls some extra material to do some arts and crafts next to me, but it wasn’t as good as truly interacting with them. I could tell they just wanted to play with me. I quickly knew I had to change my game plan, and also my sleeping pattern. This was one of those projects where you start it, and then you realize you need to pull some all-nighters to finish in time! I am definitely glad I did this project. However, I am also relieved it’s finished! I think the kids are too! 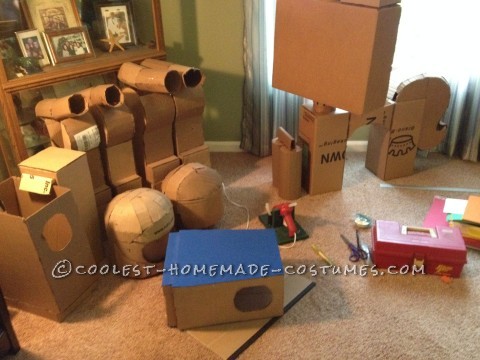 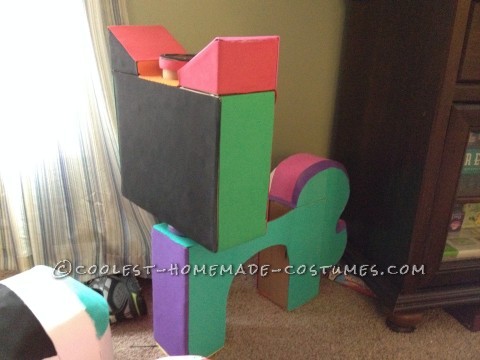 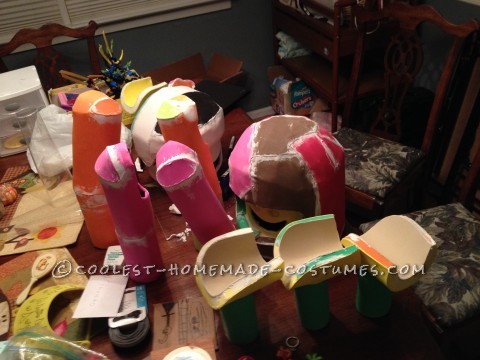