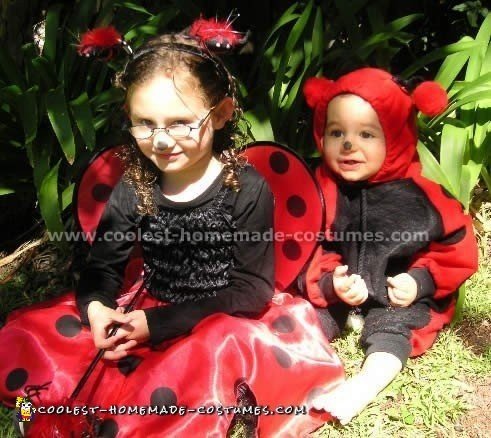 My daughter’s lady bug costume is store-bought, but the baby’s costume is homemade.

It’s a felt bodysuit, with studs at the bottom for easy removal and nappy changing! The front is made from black felt, and the arms, hood and back from red felt, with big, black felt circles sewn on. The hood is attached to the lady bug costume, with two black pipe cleaners (chenille sticks) with red pom-poms attached.

There is black elastic around the arms and legs, and black cord to tighten the hood. I think the matching costumes are adorable, especially because they are not identical, but age appropriate for each child.

Since she is a little girl (this was her second birthday) I needed just half a meter of red tulle.

I cut it into two long stripes (25 cm x 180 cm). Then I sewed up each piece and set them together. I had a stripe 3.6 meters long. In Serbia we call it a burdock stripe. That is a stripe that has two parts that can be set together as a burdock (I hope that you understood me). I sewed it on both sides of the stripe so that I could dress up my daughter easily.

She had black tights and red shoes. I made her two small ponytails and in order to make them look like antennas, I put on two black puffs.

I hope that I managed to explain the process of making this lady bug costume in a way you can understand because we have different expressions and different products.

The ladybug costume body is a typical “bag” style outfit.  The bottom is completely open with elastic gathering it at the child’s legs.  Any square or rectangular fabric could be used to make this shape, just cut a hole for the head and two holes for the arms.  This is especially true for fleece fabric because the edges do not fray if left unsewn.  Any fabric could be used for this lady bug costume.  If you don’t sew even a red pillowcase could work.