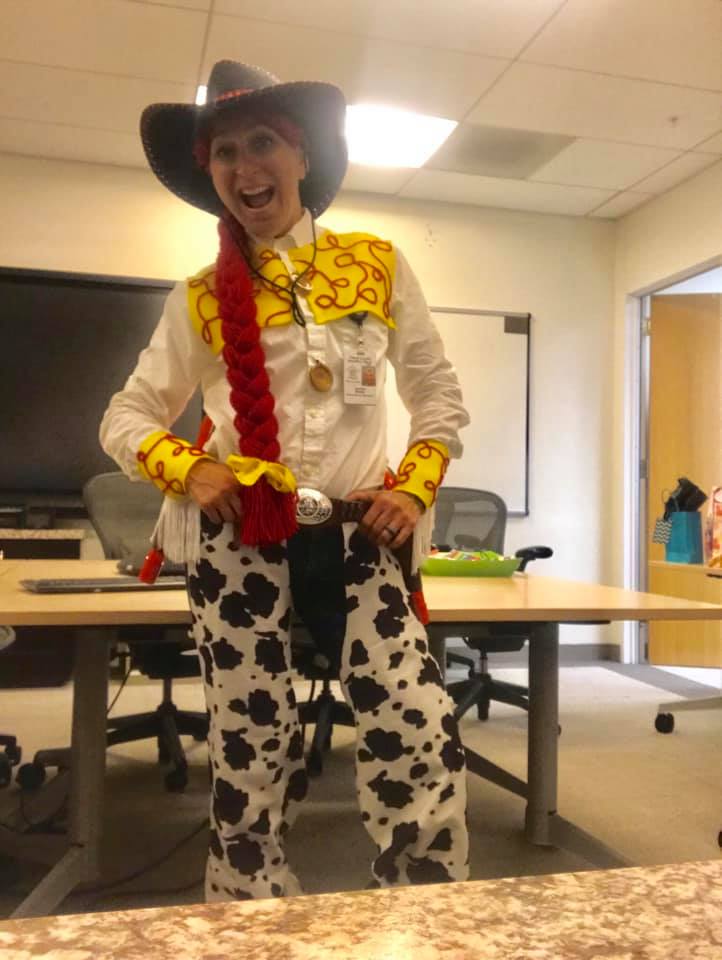 Here’s the (toy) story of how my Jessie costume came to life… My coworkers and I decided to all dress as Toy Story characters for our group dress up day at work. I chose Jessie because I had recently ‘rescued’ a cowboy hat from items destined for donation or the trash when a friend was moving. (Check one item off the list and I am all about saving a couple of bucks if I can!)

I bought yarn and with my husband’s begrudging help got together a very Jessie-esque braid.  I used a fabric/elastic headband to hold it in place and the hat fit perfect over it.  I watched a tutorial online to get a little feel for the right makeup style and attempted to pull off my version of it.

The shirt was a Goodwill store purchase resued from another costurme.  I bought some yellow felt and sewed loops and swirls of red yarn (left over from the braid so no extra cost there) onto two cut out pieces and safety pinned them in place on the shirt so the shirt could once again live on for another costume. I found large plastic button looking things on clearance at the craft store (no idea what they were actually for) and used little loops of elastic chord to secure them to the actual shirt buttons.  I used more felt to make cuffs and did the same yarn swirl, added some fringe and used velcro to close them up.

The gun belt was from my costume stash and an already owned pair of jeans and boots were added. (Cheapy costuming win)

The chaps were some cow print fabric cut into rough chaps shape and reversed and traced to cut a mirror for the other side.  I sewed on a set of ties on top and a set on the button to attach them to the leg and cut slits in the top to thread by belt through (a real belt not the toy gun belt since I actually needed support).

A plastic embroidery hoop inner ring (also found at Goodwill) tied to a length of elastic string was safety pinned under my collar as a pull string and some duck tape on the sole of my boot marked ‘Andy’ to complete the Jessie costume.

My coworker brought my trusty steed Bullseye to come along for the costume ride.