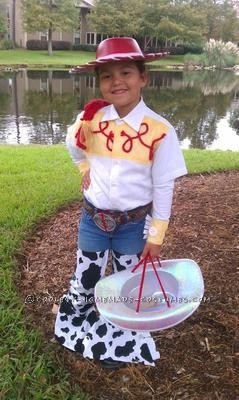 This was Halloween 2011, my daughter was 5 and a half and has been a huge fan of all the Toy Story’s but that year in particular, Jesse! So here is how I made her Toy Story Jesse costume.

Hat: originally pink, and purchased at Walmart (came in a set, $10, made for a “cowgirl” that came with pink spurs, pink bandanna). It had the exact shape of Jesse’s hat with the stitching around the rim. So what we did was pulled the stitching out and spray painted the hat red, and after it dried, we put the white stitching back in.

Braid: this was fun! I bought red yarn ($3.00) and made a thick braid and then tied it with a piece of yellow ribbon ($3.00). We thought we would somehow attach it to the hat, but we ended up just tying it to her own braid, high enough up her own braid so that the brim of the hat in the rear completely hid this.

Jeans/Chaps: I used a pair of jeans that we already had ($0). Then we bought some cow-patterned material from Joann’s Fabric Store (I forgot how much we spent, but I think I got a yards worth of material). We cut the material to fit the legs of her jeans, and then flared it out like the Jesse character’s. We did not own a sewing machine at this time; so we simply “Stitch-Witched” the material on to the jeans.

Shirt: for some reason I could not find a long sleeved, collared shirt. I scoured The Will (Good Will), boy and girl sections! So I made do with a boys short sleeved, collared dress shirt, and a simple long-sleeved shirt. For the cuffs, we hot-glue-gunned some thin, shiny yellow material (also purchased at JoAnn’s Fabric), and also purchased some over-sized white buttons for the cuffs. I also stitch-witched the yellow material at the top of the dress shirt, and hot-glue-gunned the red yarn in loops to replicate the pattern on Jesse’s shirt.

Fringe: white felt ($1.00), I cut it into thick strips and then hot glue-gunned it to the chaps and the long sleeved shirt.

Finishing touches included a belt and some cowgirl boots that we had purchased at a consignment store. Make-up was used for Jesse’s freckles. Also, we spray-painted ($1.00) white a foam circle that was purchased at Michaels ($4) and attached a small amount of elastic to the shirt in the back to replicate Jesse’s pull string. Her candy bucket was a shiny cowgirl hat bought at The Will (Good Will), found in the dress-up department for about $2. We used the red yarn and carefully cut four holes of equal distance from each other on either side of the hat to form handles.

This was such an easy and fun costume, and we got a lot of compliments on the originality versus the polyester jumpsuit versions that were going around . 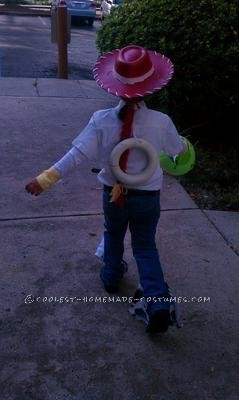 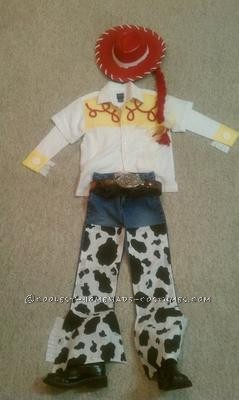