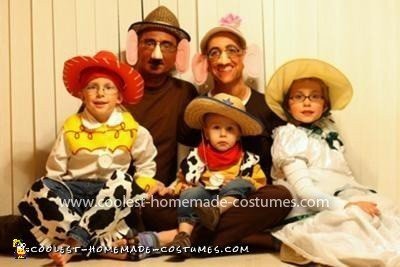 As a family, we usually let our kids dress up however they want for church/community parties but reserve Halloween for a group theme. We had a hard time deciding this year so a lot of the work was left (up to me) until the last minute. Dressing up as the Toy Story crew finally won out.

My husband and I were Mr. & Mrs. Potato Head Costumes. We each had brown pants, brown t-shirts and wore a white long-sleeved shirt underneath with white stretchy gloves (the ones from Wal-mart for $1.40/pair were perfect with a long wrist to go over the shirt cuff). We each wore our glasses and attached a plastic nose from some party store glasses party favors (we used clear hair rubber bands).

I also cut out ears from pink stiff felt and added a little sliver of pink to add dimension and make them look more like ears. We just put the arm of the glasses through a little slit on the ear and they stayed upright and silly looking all night.

We painted our faces brown with face make-up and added bushy eyebrows with a black face crayon. I wore fake eye lashes, lipstick, put earrings in my big pink ears, carried a little purse and pinned a big flower to the top of an old visor.

My oldest was Bo Peep and wore a hand-me-down dress from a friend. We poofed her hair up in front (what there is of it) and tied the hat down on the sides to frame her face. She got makeup, too, which she thought was pretty cool since she’s only 9! She carried around a big stick from the yard as her staff.

Our middle child was Jessie. Her costume took the most work but she sure looked cute! We used a white button up shirt and jeans that she already had. I traced the lines of the shirt (arm/shoulder/neck) and cut out yellow felt to match the top of the shirt. I made the bottom have a scalloped edge by tracing half of a little round cup. I didn’t interfere with the buttons by using two pieces of felt with one on top of the piece with the button holes and one that goes right up to the buttons, but it looks like it is one piece.

I used some red yarn and hot glue to make the embroider detail on the felt. Just lay it out before gluing to make sure you have it spaced right. The cuffs were a rectangle of felt with the same red yarn glued on. I did a few little stitches all over the shirt to hold the felt on but made it so we can clip the strings and use the shirt again.

For the chaps, I took a rectangle piece of cow fabric about the length of the jeans and hemmed it with an opening on the top and bottom. I used thin 1/4″ elastic strung through the top and bottom and sewed the elastic in a ring. They slipped right over her pants legs. I also cut a piece of white felt in a rectangle and made fringe that I sewed on the wrist cuffs and the chaps.

For her red hair, I traced one of her hats on knit material and made a quick stocking cap out of red material (the seam goes in the front to look like a part in her hair). I braided a really long piece of loop-knitted yarn that my daughter had made and tied with a yellow bow (used clear pony holders on the top and bottom and pinned it to the inside of her red hat). She wore her horse rain boots… when she wore them.

My youngest was Woody. I found the yellow and blue striped shirt in our hand-me-down clothes from a friend (although it was too big for him), used a cow vest from our dress up with a metal star and hat also from our dress up. I cut a small red scarf for his handkerchief.

I made his and Jessie’s belt out of two brown colored pieces of felt. I did a long strip (sewed two pieces together) of the darker for the belt and then an oval from a gold/tan piece for the buckle. I sewed a rope-looking stitch around it and cut out a 3D piece to look like a cow skull and hot glued it on. I just safety pinned the ends of the belt together. He also got buttons sewn on to his shirt and he used the stick horse to ride. 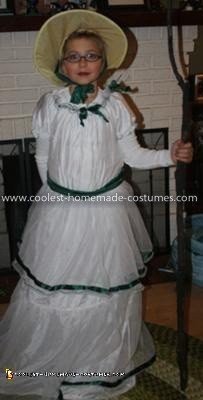