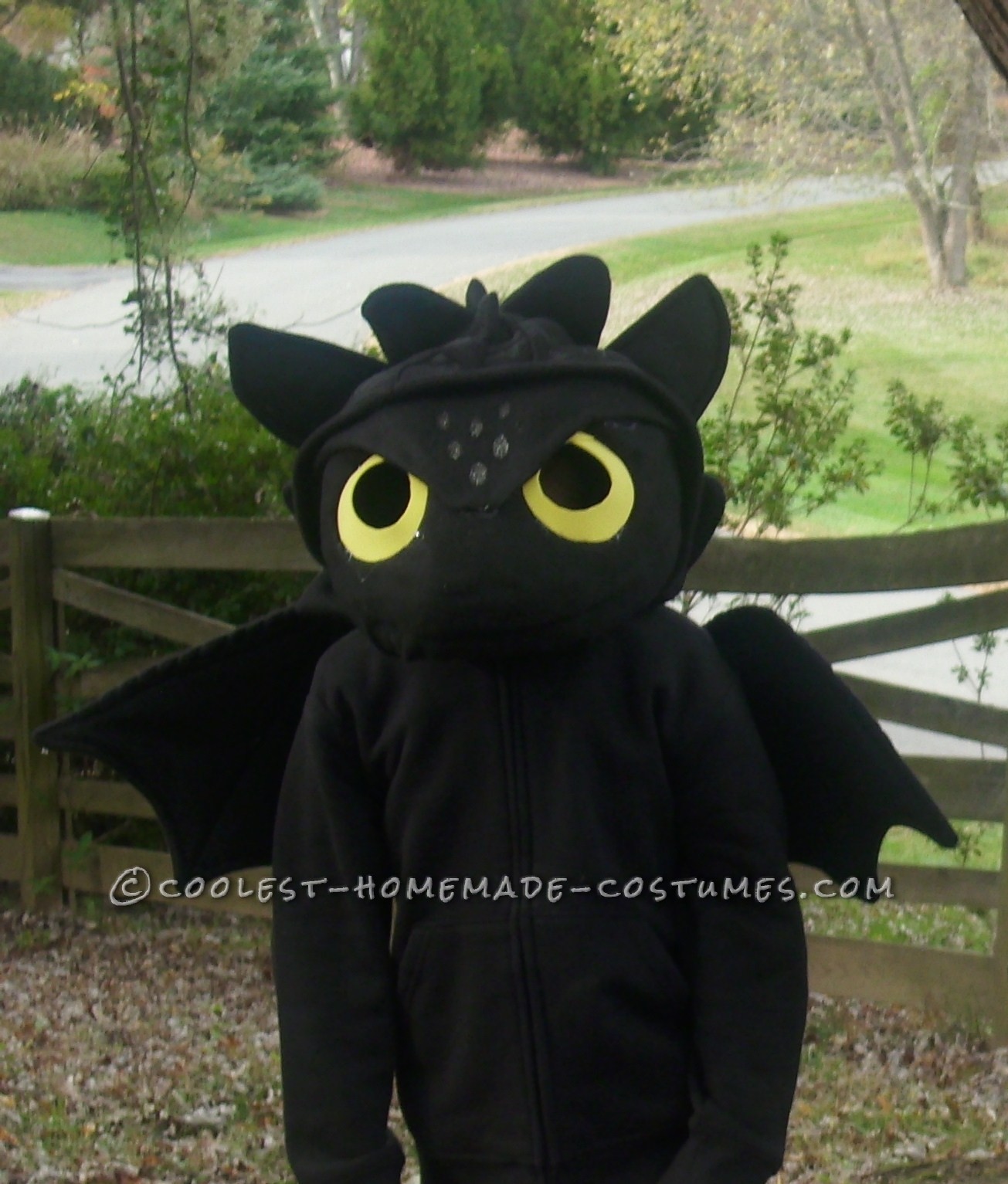 I made this costume for my son because he wanted to be Toothless from the Pixar movie How to Train Your Dragon.

I started with a plain black sweat suit from K-mart ($7) and about a yard and a half of black fleece from the fabric store.  To make the hoodie I first cut along the top of the hood and sewed a triangle of black fabric onto the top to make the opening of the hood wide enough to fit around the mask.

The fins that go down along his spine and tail are all made from triangle shapes (different sizes, nothing exact) folded once, then twice, to make a smaller triangle and then blind stitched to the back of the hood, back of the jacket and back of the tail.  The tail is a cone shape filled with polyester fiberfill.  To make the ears and the fins that go on either side of the tail I used a light-weight quilt batting to give them more shape and also so I could “quilt” the details of the fins on his tail (I used my sewing machine, not by hand).

I also used batting in the wings, but to make them stand out straight I unfurled a wire hanger and cut it with wire cutters to size.  I then contoured it to the shape of the wings and sewed it into a casing just like you would with elastic.  The wire hanger only goes along the top edge of the wings.  Now you can bend the wings to any position you like.  The tail and wings are also blind stitched onto the jacket where they need to go.

Finally, I used a silver paint pen to draw on the markings.  I would have preferred to use a black metallic paint pen, but I couldn’t find one.  My son suggested a glow-in-the-dark pen which I thought would have been awesome, but I had already finished the markings by then.

Now for the mask.  Started with a big block of foam and used a very sharp pocket knife to hallow out the middle of the block so that it would fit over my son’s head.  You could measure your head first, but I prefer the trial and error method.  I also tried using a serrated knife, but the pocket knife worked much better.

Next comes the hard part.  Cut the outside of the block into the shape of Toothless’s head.  I studied a lot of pictures of Toothless on the internet to get the shape right, but I still feel like a real artist could have done a better job.  My advice is just to cut a little bit at a time, take your time and just shave it down slowly.  But if you mess up and cut too much it’s okay because with foam you can just hot glue the pieces back on.

You’ll need to make sure the person wearing the costume can breathe so for this I cut a crescent shape out of the bottom of the chin, where my son’s mouth and nose are but where you can’t see the hole.

Next, make big eye holes.  Big ones because A) dragons have big eyes and B) you don’t want your kid tripping on porch steps or walkways while he’s trick-or-treating in the dark!

Once you’re satisfied with the shape of the face and you’re sure your kid can breathe and see, it’s time to cover the foam with the rest of the black fleece.  I really love hot glue so that’s how I adhered the fabric to the foam, easy-peazy.  For the finishing touches, I used the same paint pen to make markings on the mask and a yellow piece of craft foam cut into crescent shapes for the eyes.

I know this sounds like a lot of complicated steps and yes it is time consuming, but if you already know how to use a sewing machine and a hot glue gun, then this project really isn’t as hard as it looks.  Good luck and Happy Halloween! 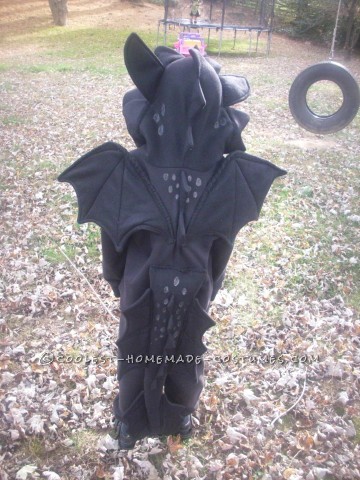 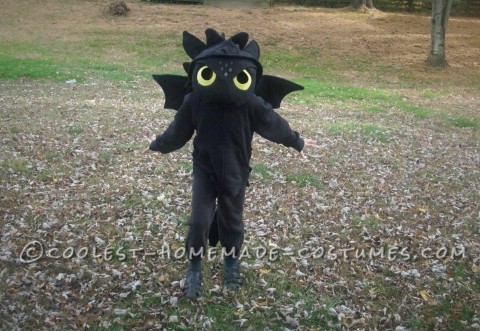 7 thoughts on “How to Train Your Dragon Homemade Toothless Costume”