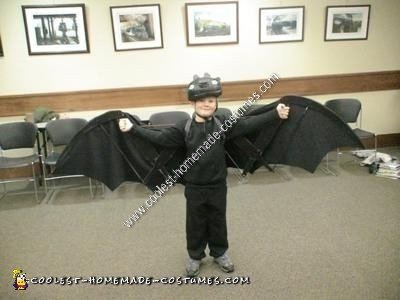 My 6yr old son fell instantly in love with the movie, How to Train Your Dragon. I searched a little while on the web, but there really weren’t any offerings for a Homemade Toothless The Dragon Halloween Costume Idea. And reluctantly, I told him we would try to work something up. A bit later while surfing through a favorite website of mine I found a “how to” for articulating wings here… I made several modifications of this for my son’s size and overall function, but I give full credit to the author.

I used an old Winnie the Poo backpack, framed the inside with 3/4″ conduit tube and cut the wings from 1/4″ plywood. The bungee cord in the back retracts the wings tightly when he’s not soaring around. The fabric on the back almost had a “scaley” look and my wife picked it up for me from Walmart. To keep the fabric from tearing if the wings were overstretched, or my son tripped, I affixed them with Velcro adhesive stickers.
Then I thought to myself, “Well, If I can make these wings, how in the world will I get him to look like Toothless???

While checking out images of Toothless on Google, I saw a billboard image of Toothless and the proverbial light went on in my otherwise vacant head. “Hey Tooothless’s head is kind of shaped like a helmet! My son had an old bicycle helmet that was only semi functional and slated for the garbage and I figured I could find a way to create a dragon head out of this somehow.

That led me to my next great find on the web – . Ultimate Paper Mache…

I don’t have a lot of “artistic talent” but this lady made it easy to make something as cool as my Toothless Head. In specific I was inspired by her Orangutan tutorial…. And let me tell you that it was as easy as she makes it seem. My son and I (and my helpful 4 yr old daughter) just kept taping rolled up newspaper to the helmet until we got a “vague” looking dragon head.

The ears and horns and “snout spikes” were cut from a pizza box and taped on as well. Then we sort of pressed and pushed the paper rolls to get a better formed looking head. After that we followed the instructions for the Paper Mache Clay (kid friendly version using Glycerin instead of Linseed Oil) and applied it to the helmet in a very messy and disorganized fashion (because the kids were helping).

After sending them off of wash up, I was able to smooth it all out, and sculpt it up a bit better. I let it dry, and then went to work with an orbital sander and my Dremel. Fortunately, dragon skin is rough and textured, because this was like trying to sand concrete, but I was able to take off all the big chucks that shouldn’t have been there and the Dremel was used for carving “scales” into the dried clay. I masked off the eyes, primed, painted and?.VOILA!! 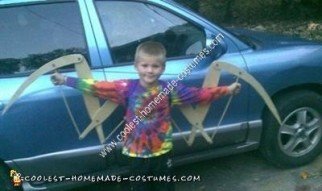 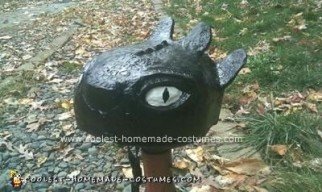