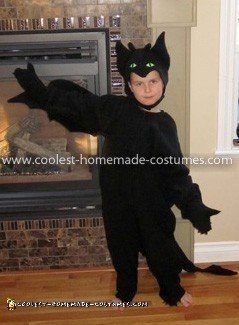 Every year I try to come up with a new idea for Halloween. This year, I decided to lend my hand at making the best Toothless the Dragon costume around. I hope that I’ve accomplished that! I put a lot of time and research into the costume, trying to make it true to the movie.

This Toothless Night Fury The Dragon Costume is made of the softest fleece around. Thick and lush.

I started off making the bodysuit that closes up the front. It has a Velco closure. Then, I created the hood, it’s complete with the two large horns and the two smaller horns. There are also 3-d scales that run up the head. The horns are all 3-d too! I made and appliqued green dragon eyes to the sides of the hood. I think it turned out wicked!

The costume has mittens and shoe covers that even have claws! What could be better?

The most labor intensive part of the Toothless Night Fury The Dragon Costume is really the tail. It is stuffed and has the bottom tail fin along with two other tail fins. There are graduated scales that run up the tail and back. These are all 3-d pieces.

All of the fins and the wings are top-stitched to show the details of the veins that existed in the movie. They’re hard to see in the pictures, but they are beautiful in person.

The crowning glory of this costume is the wings. These are large and expansive. They are longer than the arm span of the child wearing the costume. They are three layers thick. There are loops at the ends to fit over the wrists.

This is the kind of costume that kids can wear and as they run around moving their arms, they feel like they are flying!!!

I worked so, so hard on this Toothless Night Fury The Dragon Costume. It takes about 9 hours to make, but it’s worth the look on the kids face!

I hope you liked my version! Happy Halloween! 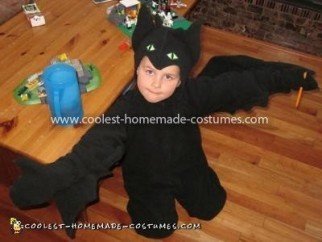 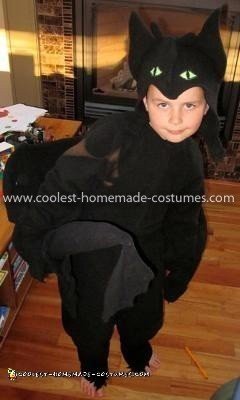 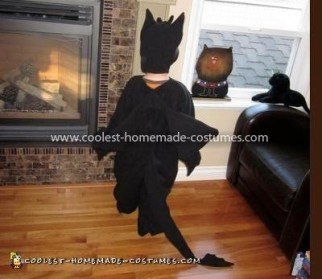