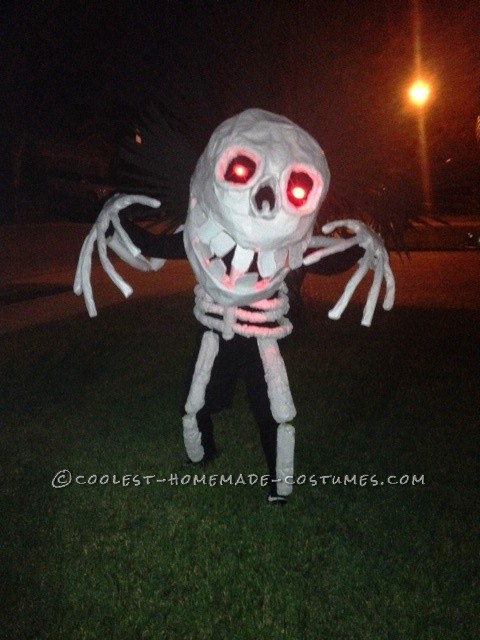 This Skeleton Man costume was inspired by a trip my family and I made to San Francisco this summer. Walking along fisherman’s wharf watching all the street performers, a large skeleton man caught my eye and at that moment I knew what my Halloween costume was going to be.

As soon as I returned home from San Francisco on August 6th my obsession began. With no formal training or knowledge of how to build something like this, Google was my sole resource for guidance. The first thing I searched for was how to make a giant head. I got many ideas from people that made costumes for the All Soul’s Procession ~ Tucson Day of the Dead parade.

The first thing I knew I needed to make was a frame for the head, I took many wire hangers and ducked taped them together and made a large round shaped head.

The next thing I needed was paper and lots of it. Fortunately while walking the dog one evening, someone had just moved into a house around the corner and they had placed all their moving boxes and packing paper to the curb. I had hit the paper jackpot.

With the head on its way I started on the bones. I had asked neighbors to save paper towel rolls. I received around 20 of them. I cut them in half and lined them with ducked tape. I used cans of great stuff spray foam insulation to make all the bones inserting wire hangers inside them to attach to each other.

Ribcage was made the same way using the foam in paper towel rolls with hangers. Hands were also constructed using cardboard and wire hangers and paper mache. After they were completed I glued a work glove on the palm of each one so I could wear them.

To wear the head a sprayed 2 cans of the spray foam inside the cavity of the head, let it dry and carved out a hole in the center where I glued a $10 bike helmet I got off Craigslist. A black second skin suit purchased off the internet for $22.00.I had some red bike lights. I attached one inside on the helmet and one in each eye.

So what I actually spent was 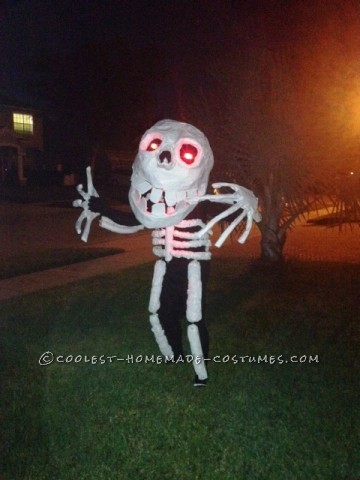