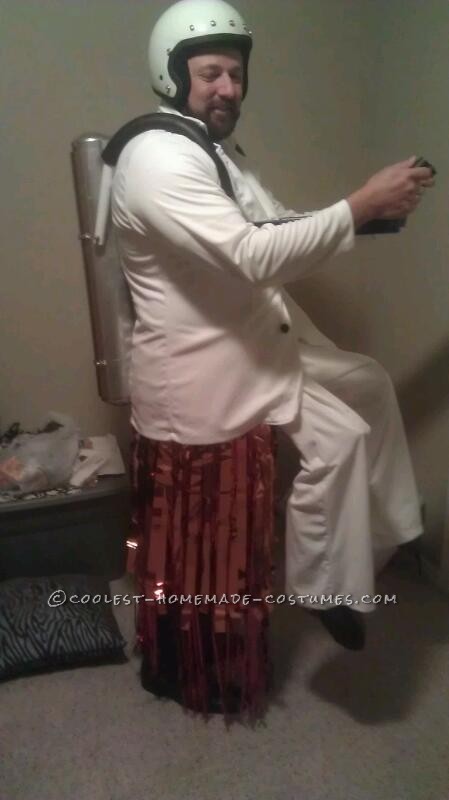 This Jet Pack Optical Illusion Halloween costume took a couple of days of planning and a lot of thought. But the results are great. People think that I’m doing some kind of magic trick at first and then they laugh when they figure out the costume.

I took one old motorcycle helmet one old Bee Gees looking costume I had for a couple of years since it reminded me of a dare devil’s/evil Knievel like jump suit (with out the stars and bars though).

Then the real work began. I had four feet of 4 inch PVC pipe laying around. I basically cut it in two for the two rocket boosters. Then I had my old pool ladder in the garage that was dismantled and I used the hand rails and the side bars to attach the PVC pipe to and make it easy to carry around. I used four large hose clamps and zip tied the hose clamps together then put the pic pipe in the hose clamps. I had to drill to holes in the upper hose clamps to put a nut and bolt through to attach the swimming pool ladder to it.

Now that the jet pack was done I painted the PVC pipe silver and put the round end caps on to finish the look.

For the feet I bought a kids pirate boot costume for under $5. I then cut a 2 liter in half and kept the bend around the neck of the bottle to make feet. I stapled the boot covers to the plastic feet and installed a metal rod to keep the shoes standing up. I then duct taped the boots to the 2 liters in the bottom of the pants. I also duct taped fishing string to the to two 2 liters and threaded then through the knee of the pants and attached them to the jet pack handles. This allows the legs to float while my hands were free to move around.

Finally I bought some table and window tinsel to make the fire. I stapled the two colors together and wrapped them around my waist and held them up with some old suspenders. For the handles, I found two curved electric conduits and bolted them to the “arm rests” of the jet pack.

Have someone help you put it together and enjoy the looks and laughs you get. It is a costume that will get noticed.

Here’s a video of the costume in action: 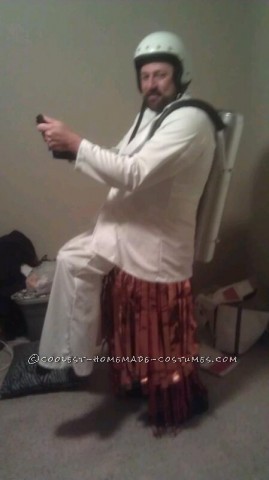