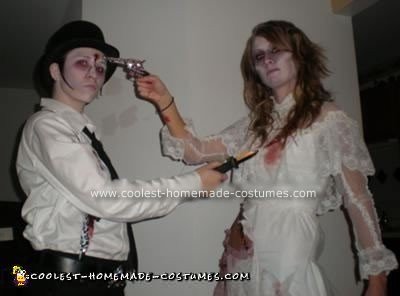 Debbie and Jesi were a happily married couple until the infidelity. When Debbie found out what Jesi had done, she ran to bedroom nightstand to grab her gun. She wanted to make sure that Jesi would never make that mistake again.

Running down to the kitchen where Jesi was preparing their dinner, Debbie started to scream at Jesi “How could you! How could you do this to me! After all that we have been through! Your are going to pay. I will make you pay. And you will be sorry.” Jesi saw what was coming and grabbed a knife out of self defense. After some screaming, Debbie forcefully thrust herself upon Jesi, accidentally piercing her stomach with the kitchen knife.

Being hurt in yet another horrifying way, prompted Debbie to pull the trigger. This automatic response caused a vicious war between the once happily married couple and unfortunately ended in an unconventional “Divorce”.

This is our Homemade Divorced Couple Costume for acting out our “play” at Halloween.

Grotesque Zombie Costume with Bloody Stomach and a Zipper Face

Macabre Chef and Her Best Dish Yet Costume