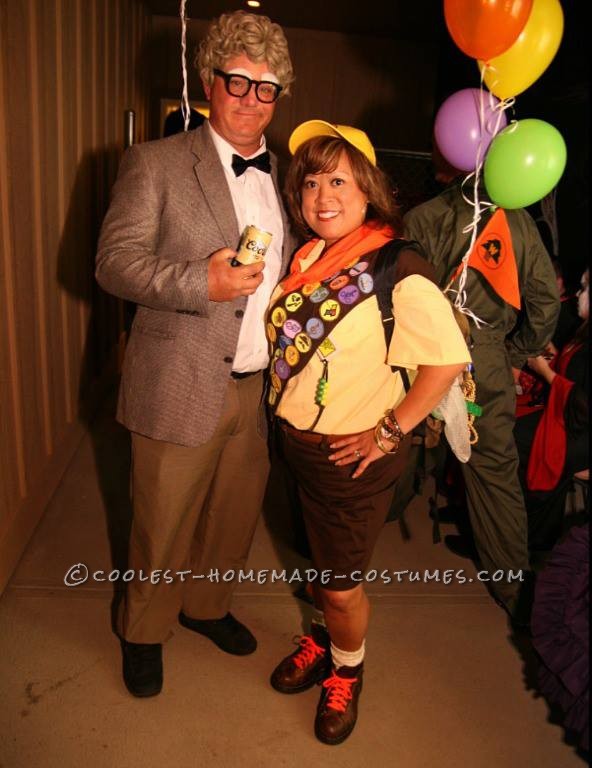 Halloween is a big deal for us :)  Each year we have a few parties to attend and we like to have a different costume for each one and no repeats!  This year we were the Exorcist, Pixar/Disney’s UP and the Day of the Dead.  This is our version of the movie UP characters.  Russell the little boy and Carl the old man.  We received many laughs with this costume and were asked to take many photos.

I was the little boy Russell and my husband was the old man Carl.  I found most of the costume pieces at the thrift store, Halloween costume store or the local craft store.  The merit badges for Russell  took the longest to make since I hand drew each one.  I used a photo as reference and added a couple of my own.

I used foam sheets and permanent markers, then hot glued them to the sash.  I made the sash using brown material.   I stuffed the pack pack with tissue paper and attached survival tools then some helium balloons.  I also attached the camp flag to the back pack.  I made the camp flag using felt and a dowel and hand drew with a sharpie.

For Carl’s costume, my husband basically just dressed like an old man, added some helium balloons that I pinned to the back of his jacket so he wouldn’t have to carry them all night. I also made the grape soda pin that Carl wore on his jacket lapel.  I used a beer bottle top and painted it sliver then used a thin sharpie to add the details, hot-glued it to a safety pin.  I also made one for Russell to wear.

This couple costume was fairly easy to make. There is no face painting or special effects, but it was so much fun! 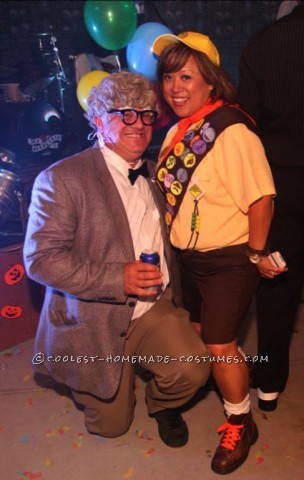 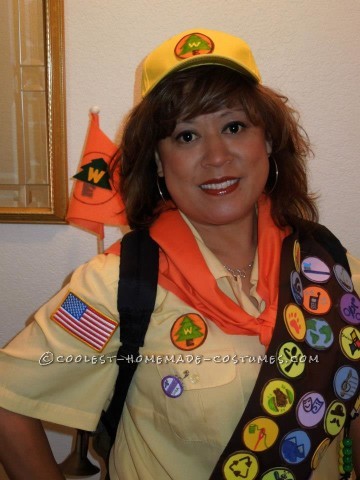 Coolest Disney Character Russell from the Movie UP with Balloons

Coolest Carl the Minion Costume for a Toddler