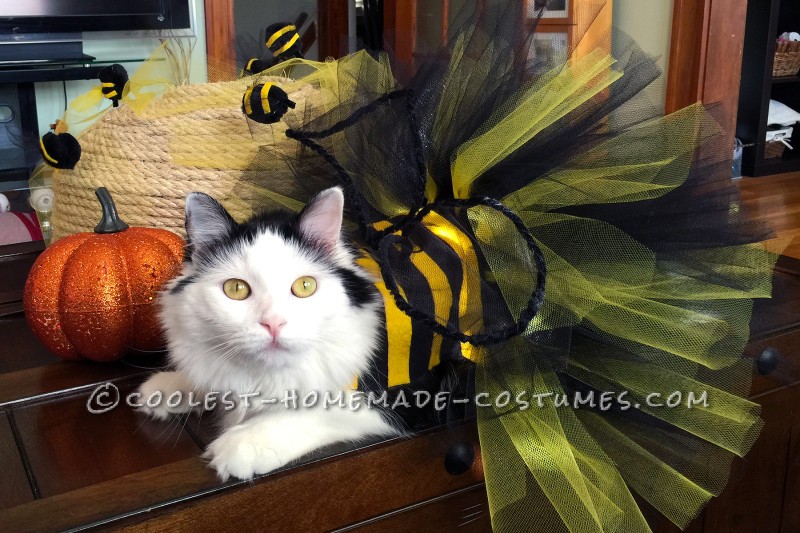 This is Sophie, shes’s 3 years old. We rescued her at a Boston shelter back in January. You wouldn’t know it now but she started life out rough coming from a hoarding situation where animals were stacked in cages. Now she’s the queen of the house and the most outgoing affectionate girl anyone could ask for. She runs around all day collecting head bunks from everyone. We’re so lucky we found each other.

She will only eat tuna treats and tuna flavored food, so when we started posting pictures of her online it seemed fitting to give her the Instagram handle “sophielovestuna”. So coming up with the costume of a cute bee worked well since she’s always buzzing around the house looking to play, and if that wasn’t enough, “Did you say Bumble Bee Tuna?” If you did, she came running!

This entire costume is homemade. I used black felt to create the body pattern which I cut out. I created the pattern then used yellow felt to cut and glue the stripes on. I used black and yellow tulle for the tutu. I cut the same size pieces of each color tulle and folded and tied them onto a Velcro waist band adding the yellow every few ones. Then I sewed the tulle waist onto the bottom of the body. The wings are made with black pipe-cleaners bent to form the wing shape, with tulle sewn over them. They are attached through the body and a piece of cardboard is glued to the other side over the pipe-cleaners ends so they stand away from the body. Velcro attached to the neck and belly straps on the body keep the entire thing on her. The hive was made from twine glued and stacked in a circle, getting smaller and smaller to make the smaller top come together. The small bees on the hive are made from black pom poms with stripes of yellow felt cut and glued to them. Each have a small tied piece of tulle glued to the top for wings and sit or hover on the hive using wire. Yellow tulle was lightly wrapped on the outside of the hive in places like honey. The pumpkin is just a prop.

This whole process was so fun to come up with and put into action. I did the entire thing on my kitchen table as Sophie laid on the other side supervising. She’s such a good girl. I needed to try it on her for size a few times to be sure the tulle wasn’t too long for her to walk and that the straps to hold it on weren’t too tight or too loose and everytime I said “Sophie come to mama” she came right over and sat on the floor. She’s used to me saying that when I put her harness to go outside on so she comes right over happily.

Putting it on her the first time and seeing her walking around without a care in the world was the funniest and cutest thing ever. The reaction when we showed people who came over were shrieks of laugher and “omg’s”. They thought she was the cutest. They couldn’t get over she didn’t care it was on and was still happily walking around collecting pats from everyone.

I hope she made you smile like she does us everyday! 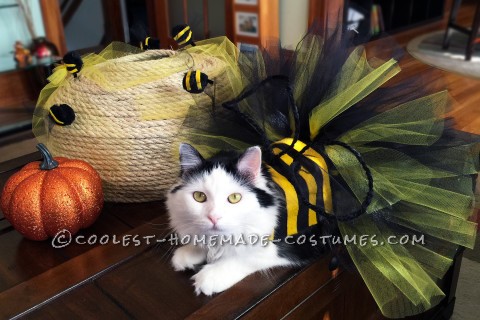