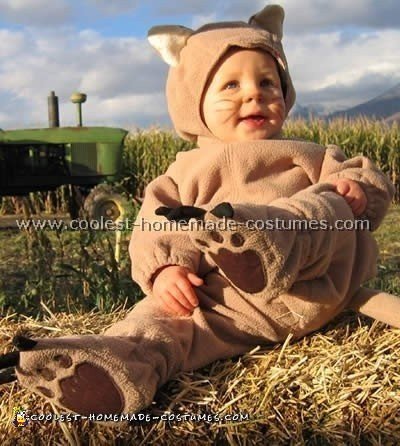 I sewed this costume from a Simplicity Sewing for Dummies pattern. I could not Halloween costume patterns on line. The costume options were a clown, tiger dog etc. I used the tiger pattern. It’s just a basic jumpsuit with booties and a hood plus cat ears and a tail.

I made a cougar because we were in college and our mascot was a cougar. I made it from a tan fleece blanket I bought at a grocery store for $4. The contrasting fabrics were cut from scraps.

I thought the liner of the hood wouldn’t show so I used plaid. I wish I’d used a plain fabric because it does show! I appliqued black paw pads on the bottom piece of the booties and made up a pattern for claws and sewed them into the seam when I assembled the booties. I also added a little curl to the end of the tail (the pattern is for a straight tail).

I made it warm to use as a sort of snowsuit. My son wore it to all the cold football games with a kid’s team jersey over it. We got tons of compliments and offers to buy it! My son stayed nice and warm too. He also wore it to a university baby contest. He won! We have a photo of him sitting on the real university mascot’s lap. When he wore it for Halloween I painted his face and didn’t put on the team jersey. He was the cutest little cougar ever! He definitely stood out among the crowd!