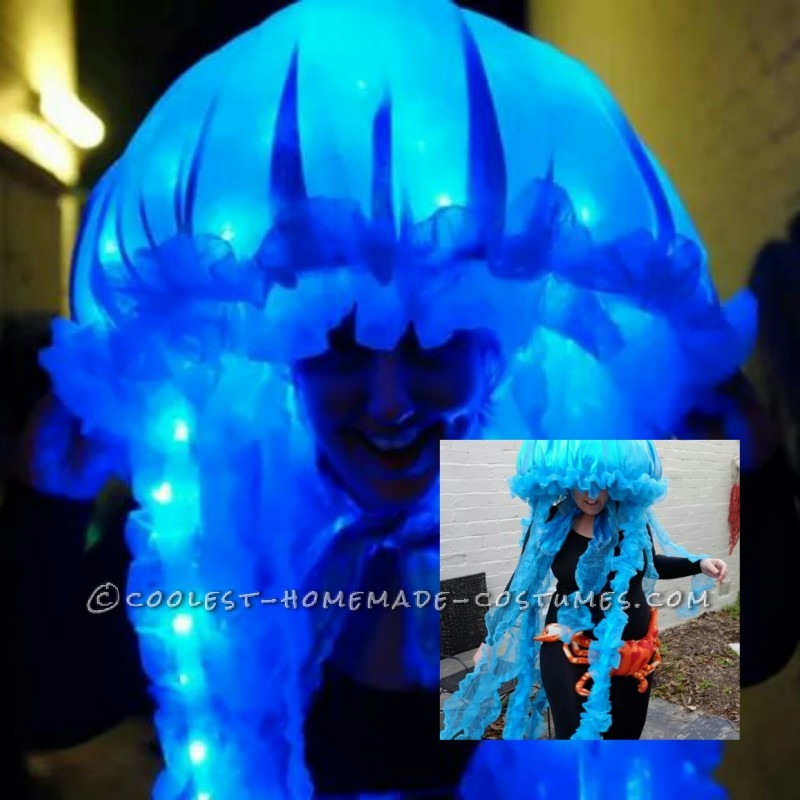 Inspired by fellow jellyfish wannabies, this costume was a true labour of love, took about 24hrs to make and necessitated the purchase of my first sewing machine. Combine the largest wire hanging basket you can find, five metres of bubblewrap, five sets of battery operated LED fairy lights, a couple of metres of semi-opaque turquoise organza, string, oodles of tape, paperclips, a glue gun, five unravelled shower loofahs, 15AA batteries and you too can glow like a bioluminescent creature of the night.

Project lowlight was ordering six electroluminescent battery operated wires for the tentacles from overseas only to realise upon arrival that they omitted an annoying high pitched tone. Not ideal when they’re to be mounted around your head!!! Back they go.

Project highlight: crashing a wedding in it later in the night of the party. Tubes of bubblewrap secured to form a helmet under the basket worked wonders to raise the basket above my head and remain comfortable all night long. Whoever realised that loofahs make great tentacles deserves a medal. The outfit was tried on by many at the party… it dwarfed the minion and looked out of place on the voodoo doll. The crab was a cheeky last minute addition. It will be hard to surpass next year.