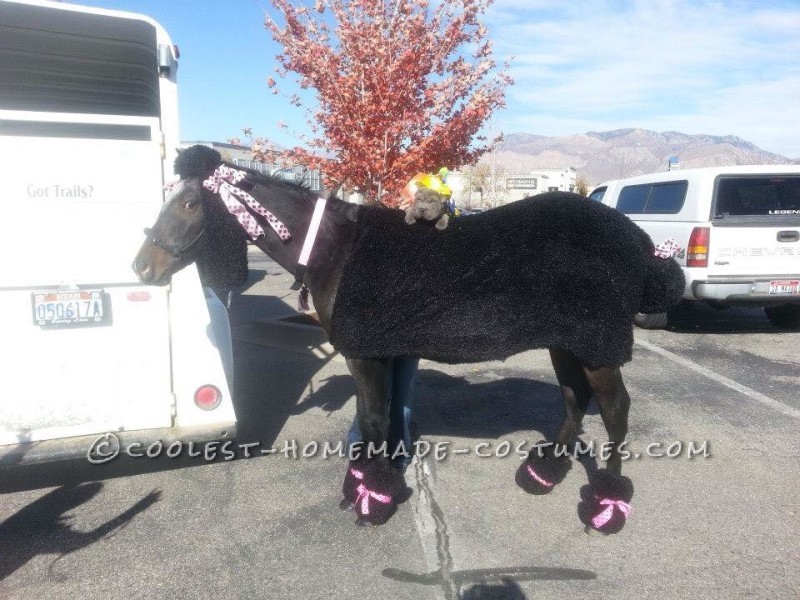 We decided to make our yearling into a Giant Poodle and Our Shar Pei Puppy into a Clumsy Clown. Luna’s Costume was bought off Ebay but we made the poodle costume and this is how we did it.

1. We basically threw the Faux Fabric over Phoenix back and let it drape and then we pinned it into position. We then slid it off his body and hand stitched it. As this fabric is stretchy that was an easy part.

2. To make the leg wraps, we measured his lower leg and wrapped paper card around it, once we got the right size we then cut some more Faux Fabric and glued it onto the paper. We added two Velcro strips on each leg piece. They would fit easier and securely around his lower legs. We also added thick padding prior to gluing to give it more of a substantial affect. Finally we glued pink ribbon across the center and tied in a bow, we added black polka dots with a black marker. We made four of these, one for each leg.

3. We wrapped his own tail with a bandage wrap so no hair was showing. We got a large 12 inch round polyester ball from Michaels and cut a three inch round hole through the center of it so the tail would easily slide through. We covered this ball in the faux fabric with glue and attached pink ribbon in a bow, we then slid his tail inside the ball and secured it with the pink ribbon bow.

4. To make the head piece we used some stuffing to make like a mullet and then we cut out to long ear-like pieces of cardboard and glues faux fabric onto them and them we secured this on Phoenix head with the pink ribbon and polka dots.

We actually took them both inside Petco! Yes Folks! We took a horse inside the store! At first we were concerned about Phoenix walking through the automatic doors; he was a little hesitant at first but then like a super champ he overcame that obstacle right away! It was like you could hear a pin drop, all of a sudden everyone just stopped and stared in disbelief.

We had a horse in the store that was dressed up a dog, haha! Everyone was taking pictures of him and Luna together and there were lots of oh’s and ah’s going on. The store was getting busy as word was getting around, we decided to put Phoenix and Luna separate in the contest as the prize was a Mini Makeover. So when it was Phoenix’s turn to strut his stuff on the runway, we were really praying he didn’t poop as horses poop in the store,  I can’t even comprehend it!

Anyway the best part for me was as he got closer to the judges table Phoenix decided to start tugging on the table cloth, haha, it was one of those moments you just had to be there.

Next up was Luna, she looked just squeezable in her little Clown outfit and people kept squeezing her to see if she was real! They thought she was a toy.

Luna took Grand Prize on Saturday for best costume at Petco. I was so proud of her.

All in all is was an amazing fun day, so we would like to enter Phoenix (Appaloosa Yearling) and Luna (Chinese Shar-Pei) into this contest as a couple. 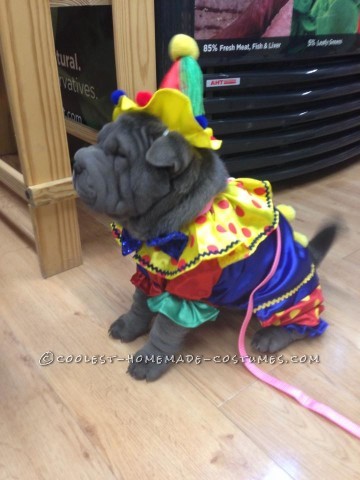 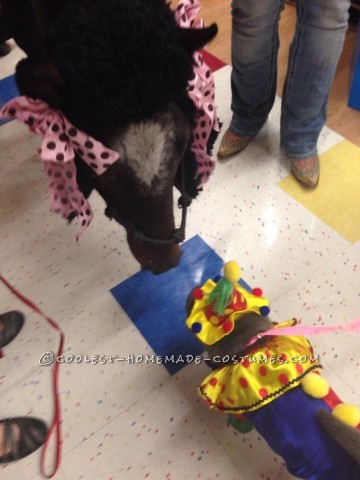