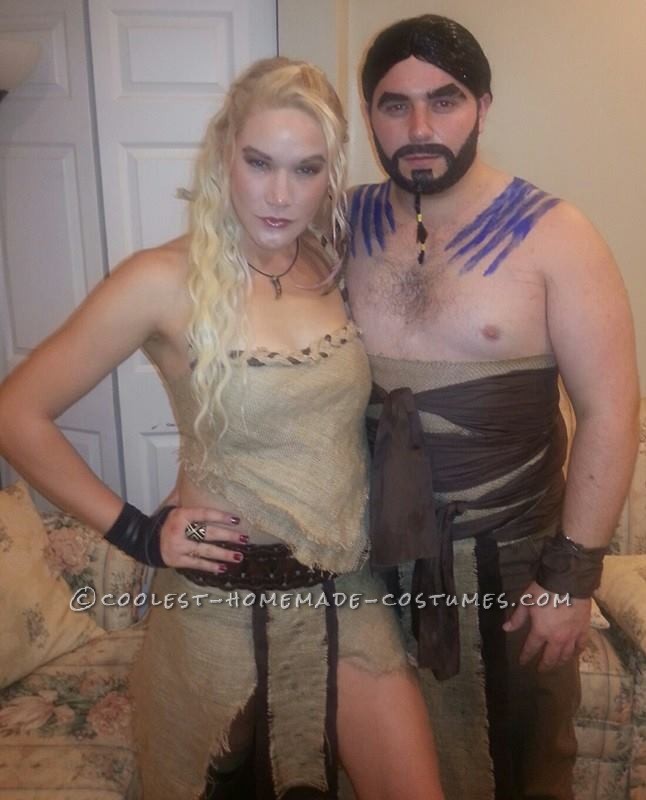 When I started thinking about what I would like to be for Halloween, I wasn’t sure where to start, but I knew I wanted to put together a costume on my own, instead of paying the ridiculous price for a crappy store bought costume. One night, I went out to a bar wearing my hair the way I typically do, but with a few braids in it. I was receiving comments left and right on how I looked like Khaleesi from the Game of Thrones. After that point, I knew what I would be for Halloween.

I started getting to work on my costume by first purchasing two yards of burlap and two yards of plain dark brown fabric. I looked up Khaleesi online to get inspiration and ideas on how to construct the costume. I started with her top by cutting a square piece of fabric from the burlap that was long enough to reach around my bust when folded in half, making a triangle. After I folded this piece of fabric in half to form a triangle shape, I cut the top layer of fabric a bit shorter than the bottom layer and made the fabric look uneven and gagged. I then did the same to the bottom layer of fabric, making it gagged. Next, I cut two long, 1 inch wide strips of fabric from the burlap and one long, 2 inch wide strip from the brown fabric. I made sure the strips were longer than they needed to be, because I would be braiding them together and I made the brown fabric strip wider than the burlap because it was a much thinner fabric. I took the three strips of fabric and tied them together at the end and braided them together. I measured to make sure the braid was long enough to spread across the front of the top and able to come together as a halter top in the back before I tied the final knot on the braid and cut the remainder fabric off. I took the finished braid and hand sewed it to the top of the front of the triangular top, making the center dip down a bit to make more of a bust shape. After I was finished with this step, I pulled at the burlap to make it look worn and stringy and then I sprayed the fabric with a clear coat of ultra cover top coat spray to avoid too much fraying. To finish off the top of my outfit, I hot glued Velcro to the halter top straps and the two corners of the triangle top to secure them on my body when wearing the costume.

The bottom of the costume was easier than the top. I took the burlap fabric and cut the shape of a short skirt with long panels on the sides. I then shaped this piece of fabric to fit my waist and secured the two ends of the fabric in the front, again with Velcro. I did the same process of pulling at the burlap for a worn look and sprayed this piece of fabric with the same clear top coat spray.

Next, I moved on to the loin flap. I cut out a five inch wide and two foot long strip of brown fabric. I made the edges of the brown fabric gagged. I then cut out a three inch wide and 1 3/4 foot strip of burlap. I took one end of each strip of fabric and attached them together with hot glue. I then took that same end and folded it to the back and attached that with hot glue, leaving a little gap to push a string through. I again pulled at the burlap and sprayed it with the clear coat.

The final steps to my costume involved adding accessories and doing the hair and makeup. I already owned brown boots and a brown leather belt, so I added those to the outfit and I added some jewelry to finish it off. For my makeup, I used very natural browns and golds on my eyes and a little blush to my cheeks. The hair was easy. I triple barreled my hair and braided three braids and connected them at the back of my head; and I was finished.

Starting with the black wig, I pulled the long hair back into a ponytail and took that ponytail and added other hair bands to make the same hair look as Drogo. I took a small piece of the hair from the wig and cut it off to make the goatee. I hot glued the hairs of the goatee together and added yellow string to the goatee to once again, imitate Drogo’s goatee. I painted my boyfriend’s beard, mustache and eyebrows in with black paint to match Drogo’s hair color and the shape of his eyebrows.

I had my boyfriend wear a pair of brown pants and I took burlap stripping and wrapped his entire midsection in this stripping, securing it with Velcro throughout. I then took the dark brown fabric and cut it into four even strips and took those strips and wrapped them over the top of the burlap and tied them, leaving the remaining fabric hanging down to add to the outfit.

I made the wrist wrapping by taking two strips and dark brown fabric, wrapping it around his wrists and securing them in place with safety pins.

To finish off the Drogo costume, I wiped blue paint, with my fingers, down the front and back of his shoulder area.

I had to have my cat join the clan, so I even made her a costume! I took a strip of burlap and a strip of brown fabric, hot glued them together and added Velcro to attach the ends together to make a mini warrior!

I had a blast throughout the whole process of making these costumes and truthfully, I didn’t know I could sew, but it appears I am a lot better at it than I thought. :) 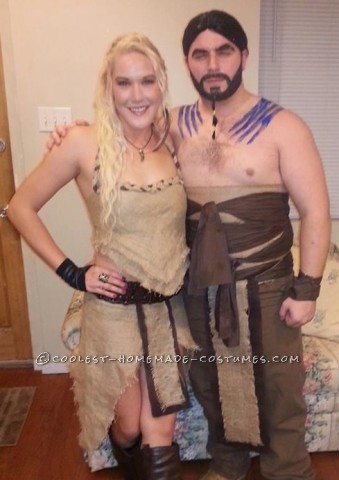 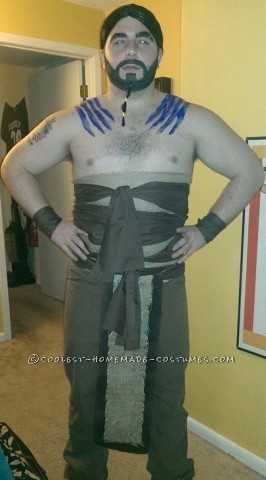 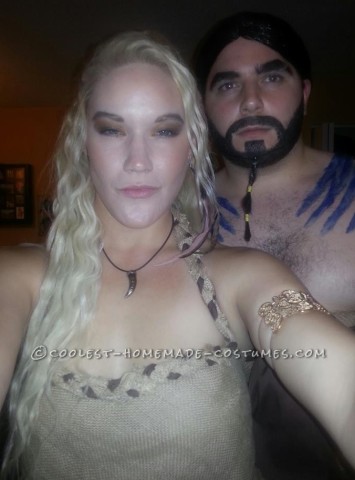 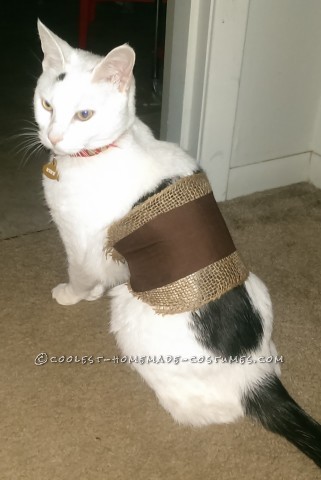 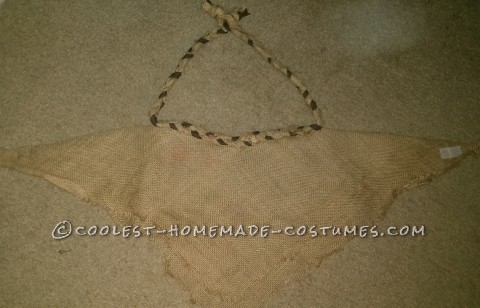 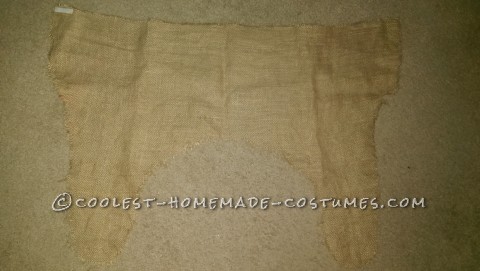