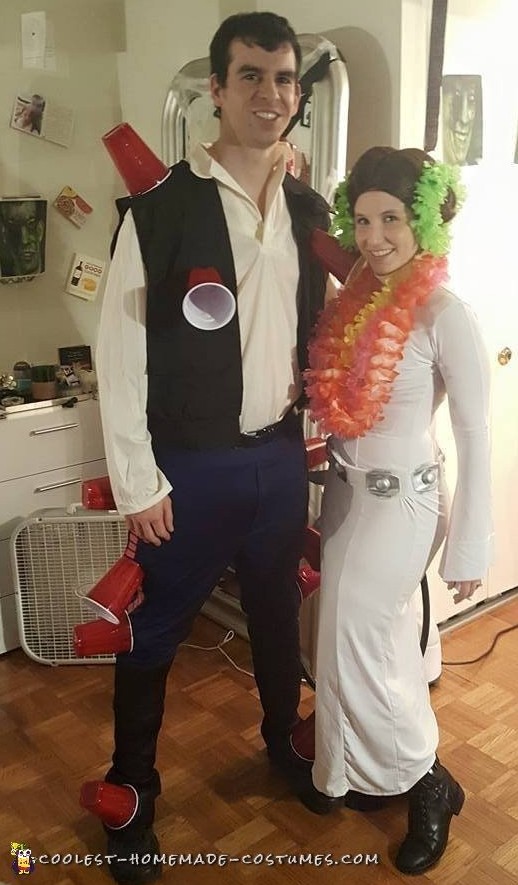 My fiancee and I love doing fun, punny costumes, so this seemed like a no-brainer for us. These funny couple costume ideas were Han Solo Cups and Princess Lei-a.

For Han Solo Cups, I did a lot of brainstorming on how I was going to combine the two ideas in a fun and interesting way. Initially I thought of using a large spray-painted garbage bin that could fit over me, but that seemed a little cumbersome. So instead I turned my focus towards actual Solo cups that would each have Han’s name on them (in Sharpie, of course).

My fiancee helped me stick them all over my torso, legs and back via a hot glue gun and to my surprise, they stayed on pretty well! The glue dried within a few minutes and that was crucial because we were hosting a party that night and we were in a serious time crunch.

The funniest thing about the costume was definitely banging into anything and everything and having to fix weird dents in the cups, as people got a total kick out of that. But it was definitely worth it because they were also really impressed! I ended up winning “Funniest Costume” in my office contest and that was my goal so I was really happy.

For my fiancee’s costume, we wanted something that made sense with Han but was also punny, and the leis were our idea from the get-go. She wore a few around her neck and put one in her hair as well to maximize Leia’s unorthodox Hawaiian-ness, and our combo was complete! People definitely “got” my fiancee’s costume much quicker than mine thanks to her bun hair, but when we were next to each other they both made a lot of sense to people.

We walked in the NYC Village Parade on Halloween and got some very interesting reactions – particularly a lot of “wow”s! I enjoyed talking to everyone who wanted to know how/why we thought of this and also had fun posing for lots of pictures. Until next year!