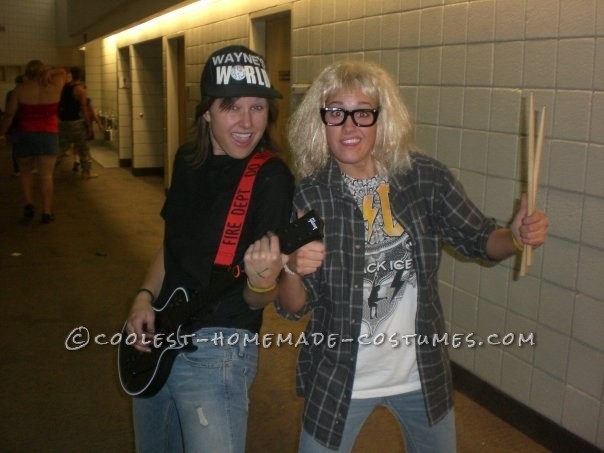 It’s hard to find a costume when you are a female. The movie mean girls is right when they say Halloween is the one night of the year that girls can dress as skanky as they want and other girls can’t say anything about them. Well, we’re not those kind of girls. Also, have you ever tried to wear those “lack of fabric” costumes” all night only to find it massively uncomfortable!

My best friend and I struggled for days trying to think of a costume that would be easy on our budget, and show up all of those miniskirt, trashy girls. Wayne’s World- Wayne and Garth was our finally our choice. I wore some tight ripped at the knee jeans a black tee a guitar hero guitar and some converse. The hat can be made from a plain black trucker hat. Iron on or stick on lettering from a craft store. My friend as Garth is on slightly looser jeans a blond wig thick nerd glasses and band tee with a plaid button up and the essential drum sticks.

Now some from the younger generation might not have a knowledge of these two awesome icons, but for us it was a huge success! Everyone knew who we were and loved our creativity. We were a little worried it might be awkward being dressed as dudes, but surprisingly we got very much attention from the male crowd, just as much, if not more than all of those girls who had to wear no clothes to get attention and feel good about themselves. This costume was proof that there are other ways to get attention, not burn a hole in your pocket, and be comfortable. Rock on dudes!