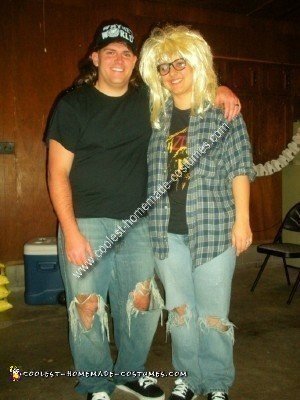 My husband and I decided we wanted to have easy and comfortable costumes since we were hosting our first Halloween party at our house.

For Wayne, I purchased a plain black shirt and hat to which I used a fabric paint marker to put “Wayne’s World” on the hat. Both sets of jeans and Garth’s flannel were purchased at Goodwill. Then, I used the fine side of a cheese shredder to shred holes in the knees since I wanted holes, but wanted to white strands to remain somewhat intact (and they don’t if you cut holes with a scissors). Wigs, glasses, and shoes were purchased from stores. For the shoes, we just purchased some deck shoes from Walmart because Chuck Taylor’s were way too expensive for a halloween costume!! And Garth’s band shirt was borrowed from a friend!!

The Wayne and Garth Couple Costume was amazingly fun and comfortable!! Our best couple costumes so far!! “Party on Wayne!” “Party on Garth!” “SWING!!!” 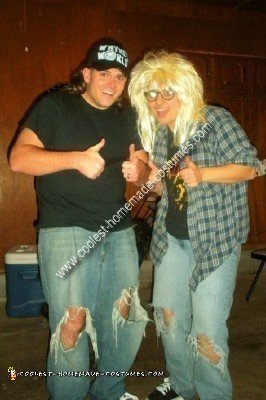