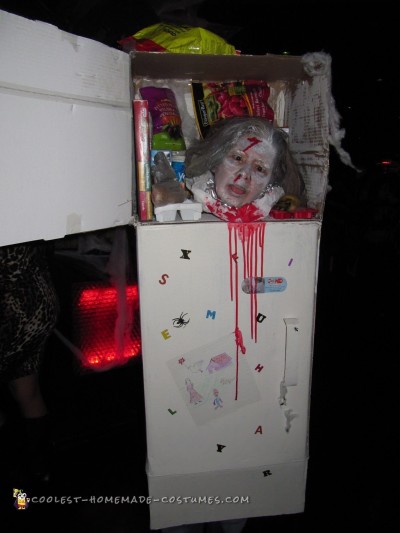 I wanted to do something really unique and creepy so I thought what could be more creepy than finding a frozen head in your freezer.

So I went scouting for to carton boxes that would do the trick. I put the smallest one on top of the bigger one  and sawed them together and made a whole in between big enough to stick my head through it. Painted it white and made some handles out of cardboard. Made small incisions so I could introduce the handles and taped the edges from the inside. Glued a pizza box, ice-cream and any empty bags I got my hands on i.e. perogies, frozen fruits etc. Of course ice trays were a must.

Put some ears on top of the ice cube tray.

Now it was time for the masterpiece! I put white make up on my face, eyelashes, eyebrows and hair. Added talcum powder on my hair and some paper and foil around my neck and splattered it with fake blood and made it drip on the front of the fridge.

Final touch: a little rolling of the eyes and Voila!

As I wanted to keep the freezer door open I put some strings on the side of the door. The biggest challenge was to keep people from shutting the door on my face and stepping back in the nick of time as the screamed and tried to shut the door on my face.

The great thing about getting this costume together was that I even put my 91 year old father to work as I got him to draw the picture and cut the letters that I put on the front of the fridge.

It allowed us to spend quality time together and put a smile on his face.