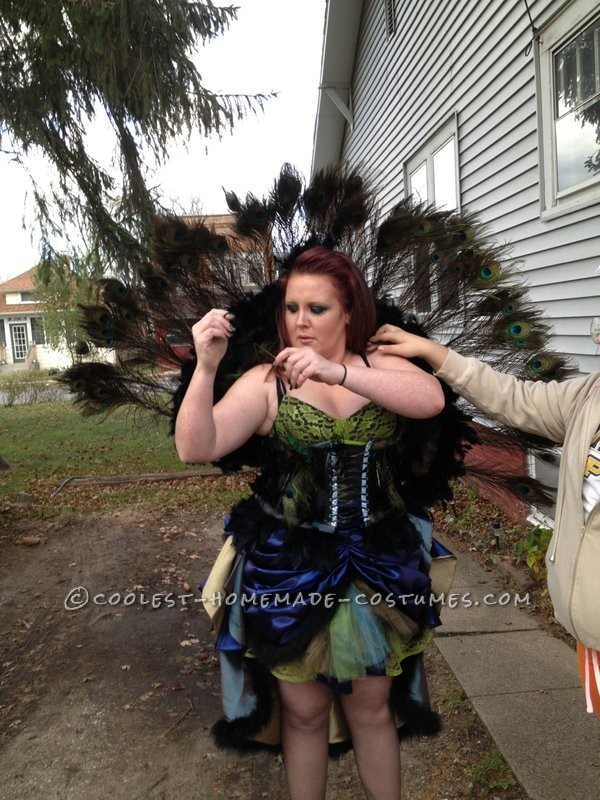 Usually I can come up with some not so ordinary costumes. I thought I had done that this year as well. Lol, but as I entered this site, I realized my costume idea was not so original. But of course each homemade peacock costume is original. All I ask is you don’t hold it against me, that my idea, was obviously not MY idea. Lol

Let see, I will start by telling you a little about my experience. First of all, I am a huge Halloween fanatic. I always make my own costume and start at least 2 months before Halloween. I had been a yearly costume contest winner up until this year. Although I was in the running, I did not take first place. But the man who did… wow!! I was impressed.

So like I said this costume took me about 2 months to finish, mind you, I was working on it sporadically. So maybe ….90 hours ….? That’s just a guess. I spent around 300 on materials. As you can see it took loads of fabric and a ton of feathers. I was quite pleased when I realized that the cost of feathers in bulk on Ebay …is MUCH cheaper than ANY feathers you can buy in the store. I did have to make one run to a farm type store to grab another 50 feathers for my collar, which was a last minute add. But if you are trying to make this sort of costume, your best bet is to go to the type of store that I found where the feathers are naturally shed and gathered rather than plucked. I also paid attention to that when buying from eBay.

Now on to the construction of the costume. I used parts of a pattern that I found for a pirate-esque costume. I just added more POOF in different places such as the bustle on the skirt, front and back. I also added very long flowing sleeves to the jacket and a tu-tu froofy front skirt. I made a corsette for a previous years costume and just recovered it this year with the fabric to match this year’s costume and added some feathers to the front which I hand sewed on. I used 5 different types of fabric for the skirt, jacket and corsette. As for the shirt, I just covered the bra area of a tank top with the green lace I had used for the rest of the costume.

I had an old pair of heels that I loved, but had become very nicked up over the years. I coated them with mod-podge and used blue glitter to cover the entire shoe. I then hot glued a peacock feather across the peep of the toe. Added some rhinestones down the quill of the father and up the side of the shoe, and attached a green lace bow to the back of the heel.

For the tail…this is where I ran into problems. I wanted a more true to life look. So I wanted to be able to have it lay down normally like a peacock would when just walking around. Then I wanted to be able to bring it up like a peacock would when showing off…so I went and bought a medium sized hinge. I connected the hinge to a dowel rod and the back of the hinge to some hard plastic that my neighbor found for me. Lol I then made a belt out of the harder fusible backing and more material. I attached the belt to the hinge with heavy duty wire and then put some spongy material (my neighbor found this for me as well) over the wire so it would not scratch me. I attached hooks to the ends of the belt to fasten.

I then began constructing the rest of the tail. This consisted of basically creating a fan type mechanism with more dowels. I then made…what was basically a large fan. I hot glued feathers to the edge of a piece of fan shaped material and then glued the whole fan mechanism to the material with hot glue. I was not worried about the hot glue showing through the material, because I was going to be covering the outside later. I then put an identical sized piece of material over the top of the dowels and feathers and secured it with hot glue. I covered the outside top of the tail with feather boas and tufts of tulle, which I just hot glued down. (Hot glue is my best friend lol) I did the same with the back of the tail, except I did not have any more feather boas, so I just used all tulle. I then attached a matching ribbon to the middle dowel through the fabrics and knotting it. Attached a safety pin to the very end and fed this through my jacket arm. So now…..I just pull the string and the tail came up.

I was unable to demonstrate this well because it was extremely windy outside (thank you hurricane Sandy) and the iPhone does not take great video or pictures in the house. I realized that once in the wind the tail began to fold on half, so I quickly added Velcro to the sides of the tail and to the belt. I could then secure the tail to the belt which was worn under my skirt to give even more security to the construction.

I also made a large collar out of feathers, which was attached toward the end. I hot glued them all together in the shape of a fan and sewed them to the actual color of my jacket. To hide the quills I attached a line of smaller feathers and then a strip of feather boa, the smaller fluffy kind.

I also made a feather fascinator for my hair. There is not much explaining to do here, I just used some left over feathers and fabric and glued them all together and pinned it to my hair. 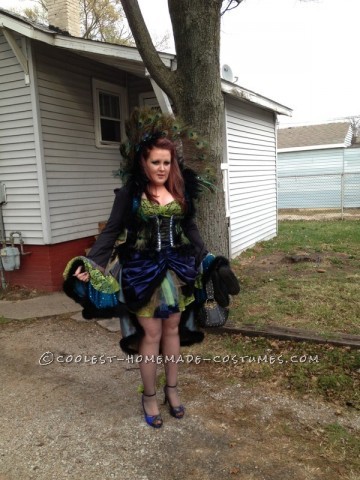 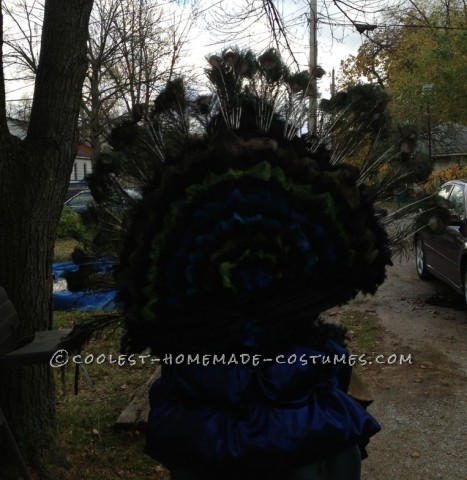 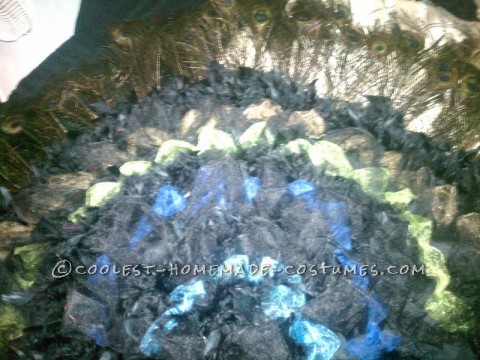 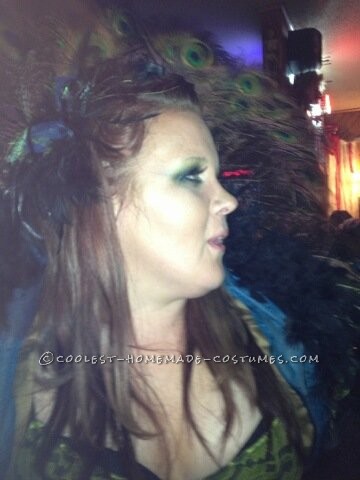 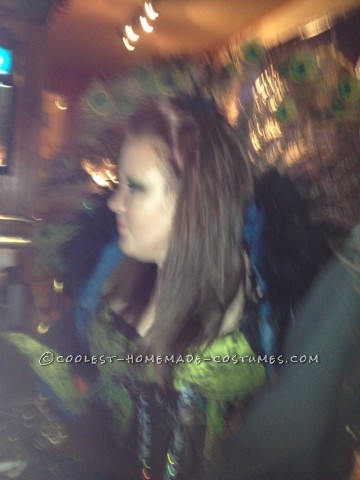