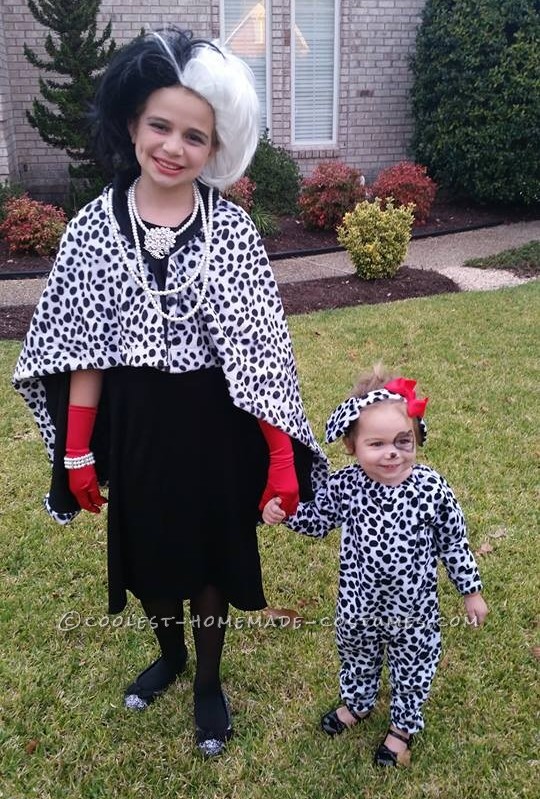 My daughters are 9 (Madison) and 2 (Ella) so it gets difficult trying to think of a themed costume idea that would satisfy them both. I had all but given up when I came across the idea of Cruella De Vil (the Cruella I saw on Pinterest was for a toddler but I knew Ella would never keep a wig on!). So, I thought, “what if I put Madison as Cruella and Ella as a dalmatian puppy?” Of course, the next hardest part was selling it to my 9-year-old, who was dead-set on being a Barden Bella from Pitch Perfect, which definitely was not happening. Have you seen what they wear? Anyway, she was unsure but trusting. I got to work designing how I would make them and materials I’d need. I ordered a couple yards of faux-fur dalmatian fabric, the infamous Cruella wig, and some red gloves for starters.

I started with Ella’s costume because I knew that would be more challenging and time-consuming. I should preface with- I am not an expert seamstress, I don’t read patterns really well and I couldn’t find one anyway. So I just took a pair of her comfy footed pajamas and laid them out and tried to cut the fur to match. My Grandma was probably watching down from Heaven, mortified. Oh, and I should also add that Ella wasn’t home through this whole process so I had NO idea if it would fit. I don’t recommend that either- lessons learned for next time. I sewed the front piece to the back piece, sewed the arms on (most hated part) and then began adding elastic to the hand, feet, and neck openings. It actually looked like it might fit a small person. Right away I knew the hand and foot openings would be too tight, and in the end they only cut off her circulation a little bit. :) I added a tail by sewing a long tube of fur and stuffing it with cotton balls and pipe cleaners to give it shape. I created a headband by sewing fabric over elastic and adding small pieces of fur with black backing for the ears. And voila, we have a puppy! A little red bow (so we could tell it was a girl) and some face makeup and $15 and several hours later, Ella’s was done!

With Madison’s, I waited until the last minute, literally the night before, because I am most productive as a procrastinator. Hers was super easy though. I sewed a simple black dress for underneath- which wasn’t perfect but I knew it wouldn’t be seen. The shawl was the statement piece. I used the other yard of dalmatian fur and sewed a black lining to it, which I discovered I ordered too small so I had to improvise (consequence of waiting until the last minute!) and make her a smaller shawl instead of a coat with pockets. I pinned it together at the chest with a broach and voila, hers was done! We had costume jewelry, but with the wig and gloves, her total cost was about $25.

I was so excited to unveil their costumes and got such positive reactions. They were cute individually but together as a set, they were adorable. It was Ella’s first halloween where she could walk and at first she was perplexed why strangers were giving her candy but she quickly adjusted! Seeing them walk hand in hand to every house, knowing Madison doesn’t have many years left, was very emotional to watch as a mom. Neighbors LOVED their costumes! They got comments on them left and right. They were told it was the most unique and creative costume they had seen all night. It was a neighbor actually that suggested your contest and said I should enter them, which I hadn’t really considered until then. I especially loved that they looked store-bought without being store-bought. And making them yourself gives you a lot more creative power to go into the details.

The best part of the night was on the way home when Madison said, “Mom, thank you for making my costume. I was unsure at first but I love it! This was the best Halloween ever!” This was followed by a short pause and then, “So I have a question, does Cruella just shave the puppies fur or does she kill them?” Ummmmm, eat your candy! 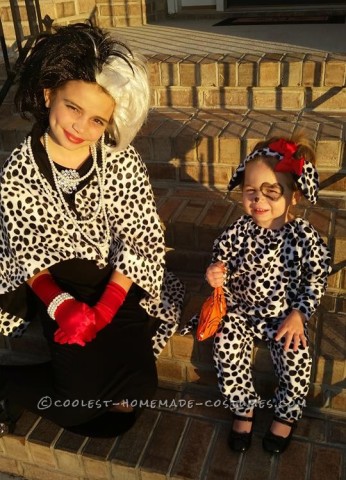 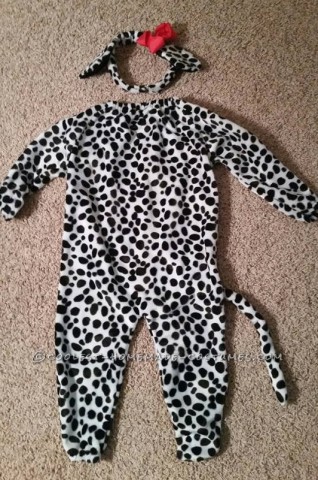