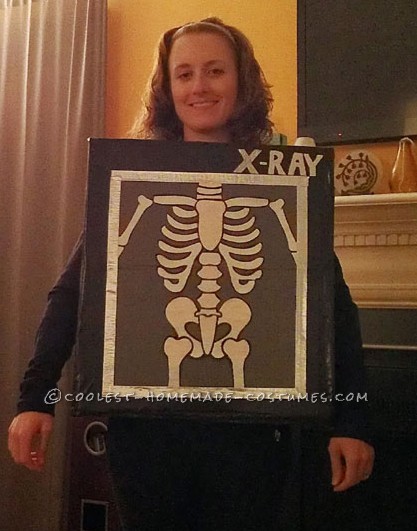 I knew I wanted to make a box-based costume this year, and stumbled upon the idea doing an image search. I didn’t see a lot of homemade versions, but it is such a cute and simple costume! (Maybe I’ll start a new trend?)

This glowing X-Ray costume was really easy. I cut head and arm holes in a box and painted it black. I used black duct tape over the clear tape holding the box together that didn’t take to the paint. I added a dark gray rectangle in the center, using painters tape to measure out the rectangle. I covered the edges with thin metallic duct tape so I’d have a clean border.

I found a graphic of a skeleton online, and cropped it so I only had the parts I wanted. Then I enlarged it as much as I could and printed (landscape mode) — it pretty much filled two pieces of paper. I cut out the skeleton and used spray adhesive to glue to the box (any glue would have worked, but I had some handy). I wanted to glow, so I painted the bones with glow paint. It wasn’t as glowy as I wanted — it had to be really dark in order to see it. I used a silver marker to write X-ray along the top. I meant to add an on/off switch to the left side but ran out of time. I decided it was still fine without it.

I had fun with this one! I wore it to a Pumpkin Fun Run at a local running shop. I won 2nd place to a bag of jelly beans. Huh. I thought I was a lot more creative! 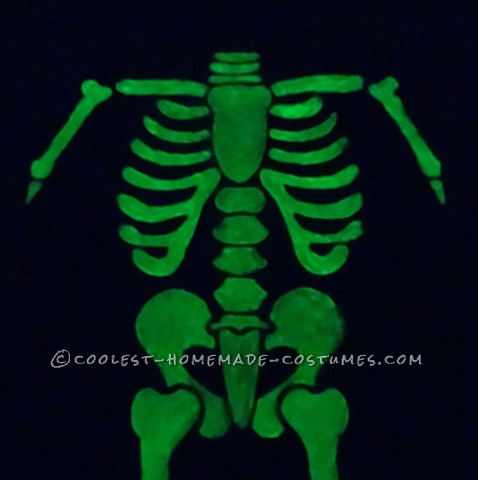