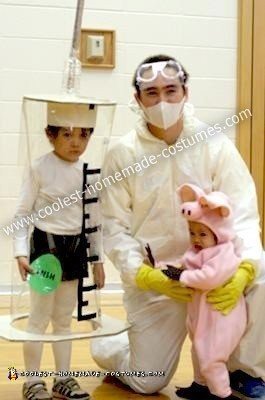 I’ve been making my kids’ costumes every year since my older son was born. It has become one of my hobbies now. As we were thinking about the ideas for Halloween this year, I wanted my younger son to dress up as an animal or something cute because I think little toddlers are so cute dressed up as animals, and they won’t be cute forever.

I usually only make my kids’ costumes since they are so easy, being small. My husband and I just put things, that we already have, together and add certain accessories which match the family theme. As we were looking for things that we had, I found this white vinyl full-body hooded suit that my husband had brought from work some time ago. We thought about how we could use this suit and came up with the idea of impersonating a CDC employee, because once in the suit, my husband really looked the part.

It was pretty easy after that. Our homemade Swine Flu group costume was on the way: my little toddler was the pig and my older boy was a H1N1 vaccine shot. We thought it was a great idea, since it is very topical right now.

I basically used my son’s footed pajamas as a pattern. I used his hooded jacket as a pattern for the head. I then studied some pictures of pig costumes and created the nose and the ears. I used pipe cleaners for the outlines of the ears and the tail, so that you can curl and shape them the way you want. I also used elastic for the hood so that it fitted better around the face.

The top and bottom were made of cardboard. Clear plastic, bought by the yard, was attached in between. The needle was a rolled up piece of cardboard, wrapped with aluminum foil and then with clear tape; its base was a pet water bottle.
The volume measurement markings were made with black tape and the numbers written with a black permanent marker.