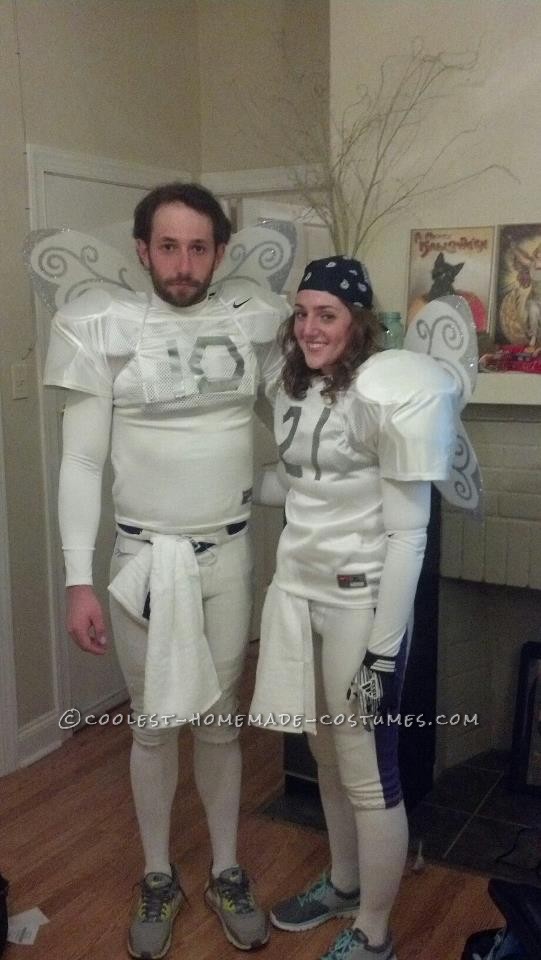 I am quite serious when I say that this was a last minute decision. My boyfriend isn’t necessarily as enthusiastic about Halloween as I am, but he agreed to dress up with me because he knows how much I love it. So, I was faced with finding a costume that was unique and fun, but also appealing to a 25 year old jock. I came up with this idea literally the day before we were going to dress up. I was rather proud of the idea, especially when my boyfriend said he loved it and started brain-storming on how we could put it together.

At the time, he was a high school football coach. Lucky for us, he had a key to the locker room at the football field. The day we were supposed to be dressing up, we strategically planned to rummage the locker room after the team was done with practice for the day. It was an embarrassment of riches. They were smelly riches, but riches all the same.  Don’t worry, we found new, clean equipment.

We were able to find football pants of the appropriate color with belts and football pads. It took a while to size my 5’6″ frame for shoulder pads, but we succeeded. We continued our trek by stopping at Dick’s Sporting Goods where we were able to find plain white practice jerseys. They were junior sizes, but we made them work. We also got tall white socks. Next, we stopped at Wal-Mart and picked up just some white bath towels, white under-shirts, and the signature bandanna for Deion Sanders. The wings came from our local Halloween store, the gloves and arm bands were left over from my boyfriend’s football playing days, and the numbers were created from trusty Duct Tape.  Add a comfortable pair of tennis shoes and our costume was complete.

As we walked down the streets in downtown Pittsburgh, we heard people yell from near and far, “It’s on!”

Awesome Homemade Rosie the Riveter Costume – You Can Do It!

Awesome and Easy Homemade Energizer Bunny Costume for a Woman