FAIRY TAIL STORY: It’s been a few years since I’ve dressed up for Halloween, but my motto is GO BIG OR GO HOME! This year I wanted to make something awesome to be put in the running for my office costume contest. I saw an image of a peacock outfit and knew I had to recreate it for myself. I am an arts and crafts, Pinterest, and DIY LOVER, so this was just an average weekend project for me.

After a month of planning where I would get the materials and how I would design the outfit, I gathered my feathers from Michaels and Hobby Lobby, and then ordered my peacock feathers offline. The one thing I wished I had done back in September was pre-order the peacock feathers in bulk from eBay or amazon.

FAIRY TAIL ENDING: I looked beautiful! I normally wouldn’t say that about myself, but all the hard work and time showed in my HUGE smile that I had on all night. I received tons of compliments on my costume and that really meant a lot to me, I even won second place in the costume contest that night!

When I showed back up at the bar on Halloween night, a lady had a bartender find me to give me a gift card that she had bought for me. She was at the bar on Wednesday and thought I looked so festive, had a fun spirit, and should have won overall. She absolutely made my night. By far my best Halloween ever! I kept my costume a secret from my coworkers, and boy were they but they were NOT surprised at all that I created the entire piece myself. I am known for putting a lot of thought and effort into things like this. :) I was the Pretty Peacock that they all love and adore! 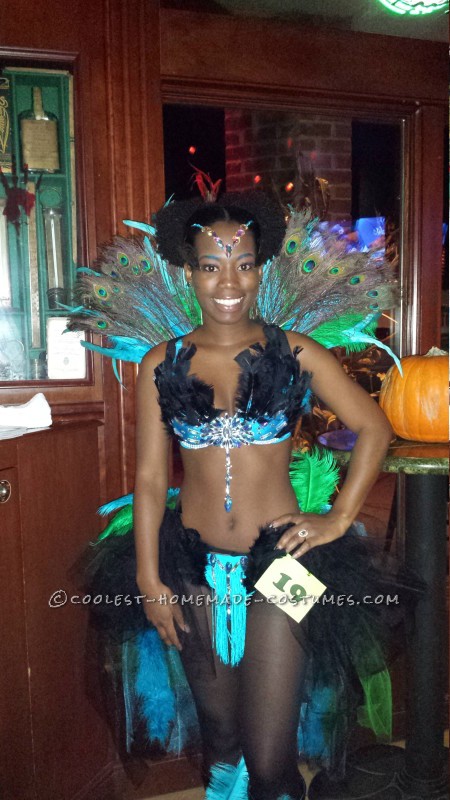 I saw a kids version of the peacock tail online and decided to go with the same format so that I would be able to take them off while I drove and while I was at work. I cut out a round cardboard shape and super glued elastic for shoulder straps like a back-pack (which I referred to the whole day, ha ha). Then I laid out a row of blue feathers that I borrowed from a former Carnival neck-piece since they matched, followed by a row of peacock feathers, and then a final row of blue and green ostrich feathers. I used black felt to cushion both sides of the backpack. On the back side of the tail I used a blue boa and blue feathers to cover up the felt. And wa-la, I finished 1/3 of the costume, ha ha. This took me about two hours in one day. 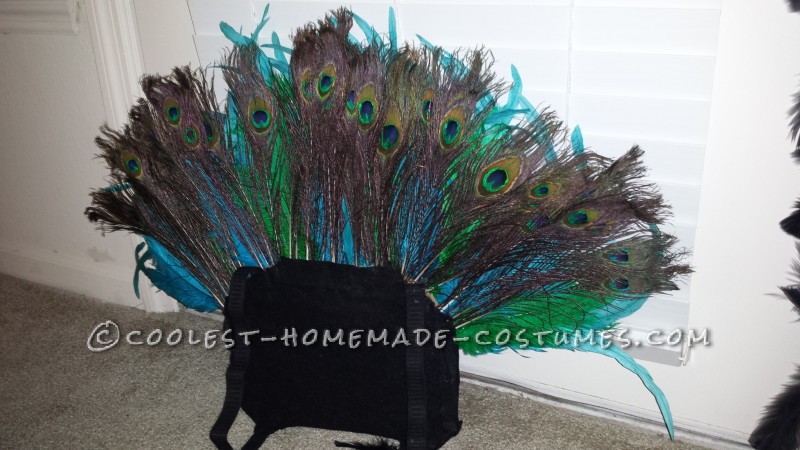 I constructed the skirt using a cut stocking leg and lined it will strips of cut black, blue, and green tulle. I tied blue and green ostrich feathers along the back. And I glued a bunch of black feathers to a sheet of tulle and tied it black of the skirt, and threw in a few peacock feathers. The best thing about the skirt was that I got to readjust it to form different looks if I wanted to, This 2/3 part took me about six hours over a two day span. 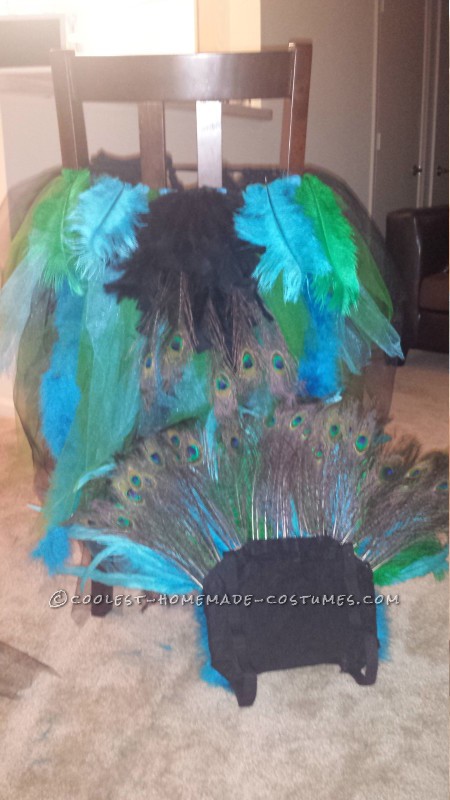 I bought a black tank-top from goodwill and just glued a handful of blue feathers, followed by a ton of black feathers along the front. For the bottom I wore black leggings with a black skirt and black boots tied with a blue ostrich feather glued to a blue string. 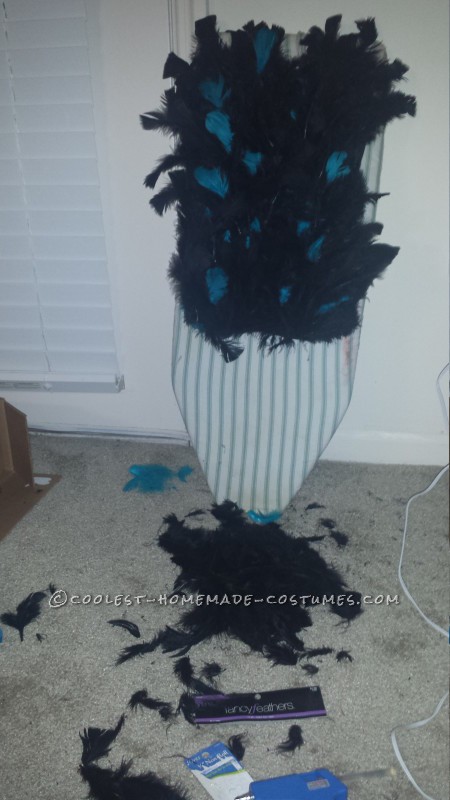 In September I participated in the Miami Carnival. I thought about just adding feathers to the bra and bottoms and revamping the outside. I mean the pieces were just sitting there as I would not wear the outfit again and the colors matched perfectly. Last minute I spent Monday night gluing away. I decided to try out the outfit for a costume contest at a beach bar on Wednesday night. I wasn’t super thrilled with the piece until I put the entire ensemble together. 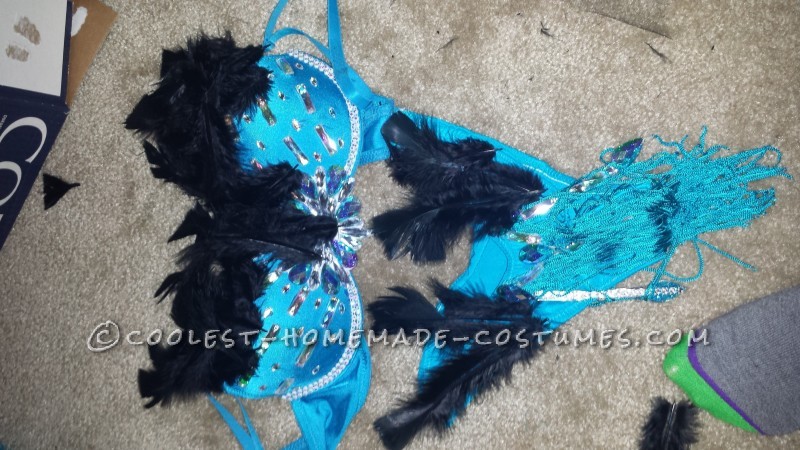 Once the outfit was on, the face was THE best part! I really love to do big things with makeup and jewels and I am a newbie. I tried to make my face like a peacock, but I looked funny so I decided to keep a natural look by accenting my eyebrows blue, adding left over peacock feather tips to the sides of my eyes, and throwing on some fake lashes. I put my hair into curly pigtails and added my Carnival headpiece as the finishing touch. 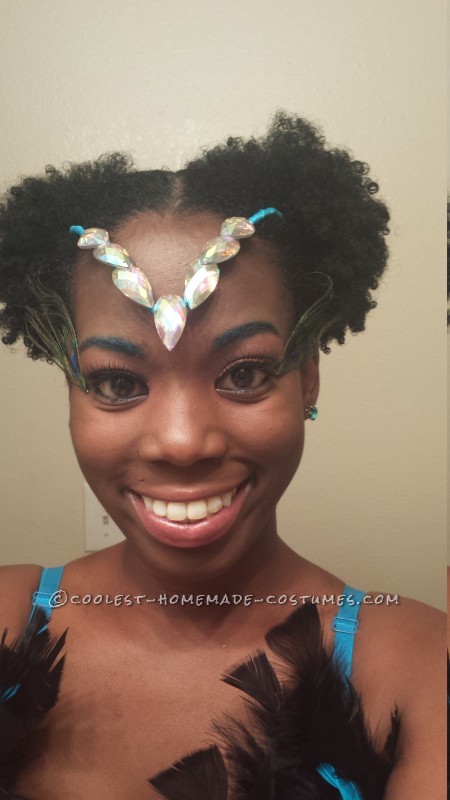