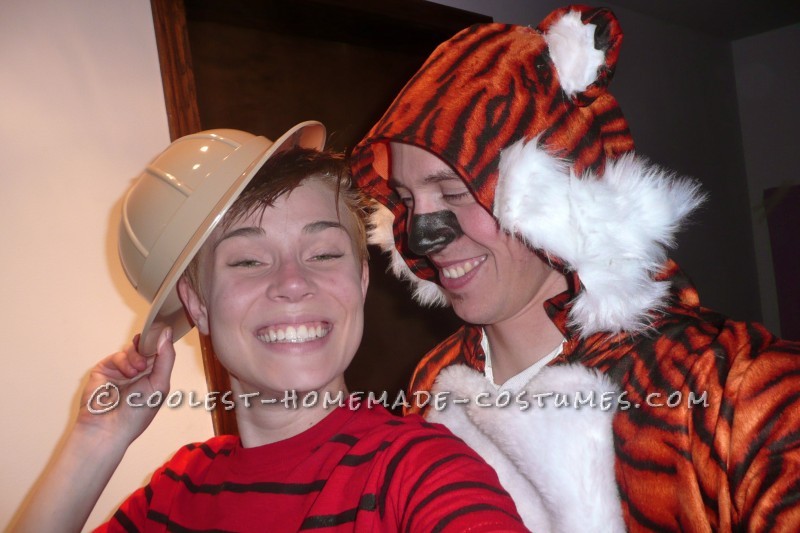 I am the type of girlfriend that likes the idea of a couple’s costume at Halloween; it is “my thing”. With a mutual love of Calvin & Hobbes comics, we incorporated something that was “our thing” into our costume. Calvin was a given for me with the short blonde hair and all. The rest of the costume consisted of buying a large red t-shirt from the craft store and using black fabric paint to make it look like Calvin’s fashionable attire.

Other than that, I just wore my boyfriend’s black shorts, sneakers, and absolutely no make-up. Comfy costumes (especially for girls) are the best! Hobbes was a little bit more of a challenge. I didn’t want to spend money on buying a pattern, so I improvised. With the help of a disposable tyvek suit and a borrowed sewing machine, I put together tiger stripped fabric in a onesie like shape and a tail (stuffed with cotton and a coat hanger). Using faux fur I made the chest (to cover the zipper), ears, and fluffy cheeks. After that, just add some white gloves. Considering that Hobbes is after all an imaginary friend, we kept the face painting simple. Instead of a whole tiger face, we went with just a black nose.  To add to the theme, we carried around a can of tuna for Hobbes and a dry erase board that was shaped like a speech bubble and marker, just for fun.

We played out our favorite parts of the comics: holding hands, playing in the snow, and even wearing safari hats as if we were exploring the world like Calvin & Hobbes would. The innocence of the costume was half the fun.

Together, we were adorable, and easily recognizable to other Calvin & Hobbes fans. Apart though, he was confused with Tony the Tiger and I was asked why I was dressed like a 10-year-old boy! But, that is the point of a couple’s costume, to be recognized together. Not like you can easily separate Calvin from his stuffed tiger, Hobbes, anyways! 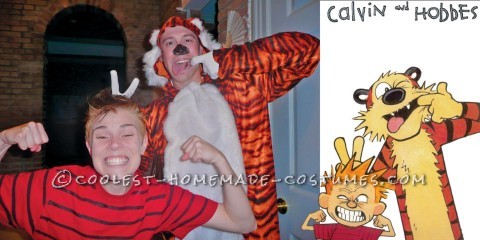 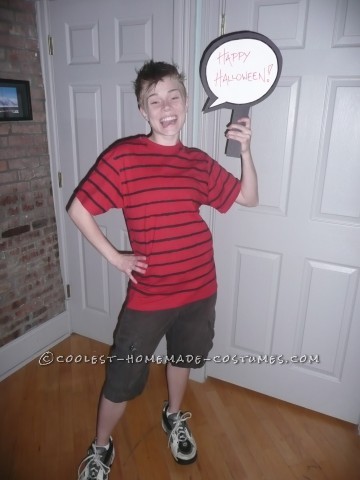 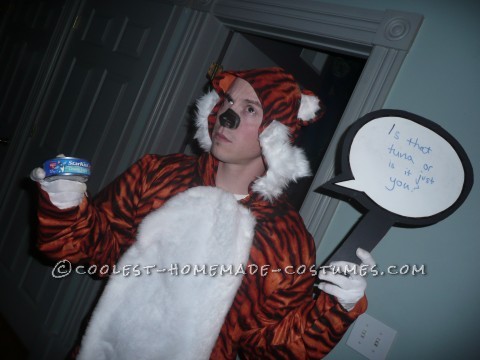