Originally I was just fooling around at work and starting making giant minions out of cardboard to decorate for Halloween.  Everyone loved them so much I decided to make a costume version.  This was a very simple costume made to be worn like a human billboard.  It consists of 2 giant sheets of cardboard from a recliner box, pipe cleaners for hair, paint for the color, black foam sheets for the belt/buttons/eyes, 2 blue poster boards for the overalls, duct tape to make straps, a sheet of shipping foam, and a dry erase board sticker sheet for the eyes and mouth.

First to make the correct shape, I used a pencil attached to a string to make the top as circular as possible.  I taped down the loose end of the string in the middle of the cardboard and drew a half circle on the top.  From here I cut out the shape with an exacto knife.  Next I painted the parts that needed to be Yellow with a “used/discounted” household paint sample I found at Lowes for $1.50!  The overalls were just 99 cent sheets of blue poster board that I found at a local craft store.  I just cut them into the desired shape and glued them on with a glue stick.  Since the back looked kind of plain I cut out a butt flap that remained unglued and open to show some crack!  To make the Gru symbol on the front, I just printed a picture of it I found online and then cut it out with an exacto knife and glued it on.

To make the eyes and mouth, I used a roll of dry erase sticker sheet from Walmart for $5.  I traced a trashcan to make the circle of the outer goggles, and then a wall clock to make the inner circle.  I then drew the mouth and cut them all out.   Looking back I guess a 99 cent white sheet of poster board would have done the trick (as well as make this a $5 costume), except I already had the dry erase roll from another costume.

For the goggle straps, pupils, and buttons I cut out the shapes from a sheet of black craft foam which usually cost about $1/sheet.  I glued on all of them except for the pupils.  I rolled a piece of masking take in a loop to attach them so that I could move the eyes around for different expressions.

Since the cardboard was corrugated the pipe cleaners slid into the top perfectly without the need for glue.  I then used a black marsh pen to outline the body and clothes to make it really stand out.

The final step was attaching the two pieces together.  I stuck 2 pieces of duct tape on each other to make the straps and then taped those on with more duct tape.   To prevent my knees from hitting the inside as I walked, I glued on some shipping foam (I got free from work) to the chest and upper back area.  These worked fairly well as cheap cushioned spacers.

When I went out, there were A LOT of Minion costumes, but none of them were as cheap or unique as mine!  Also, lots of people loooved seeing the butt crack as I walked away! 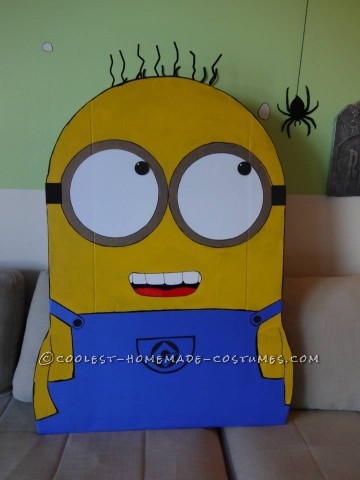 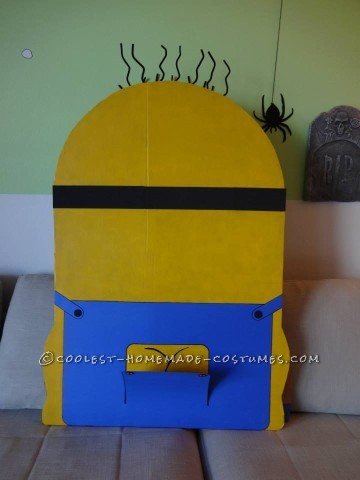 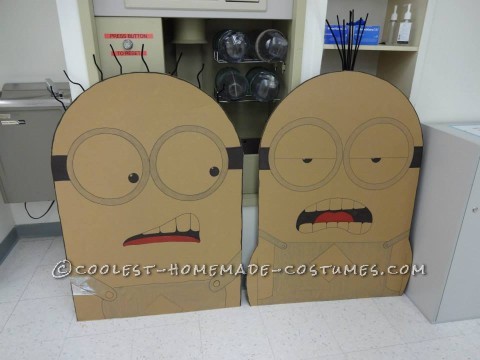 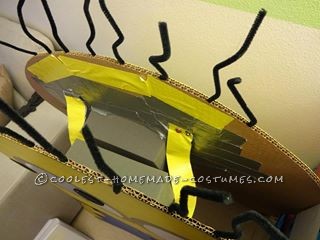 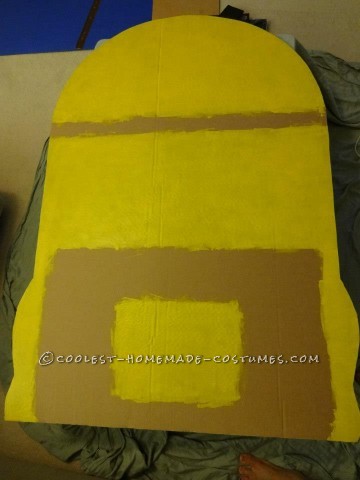 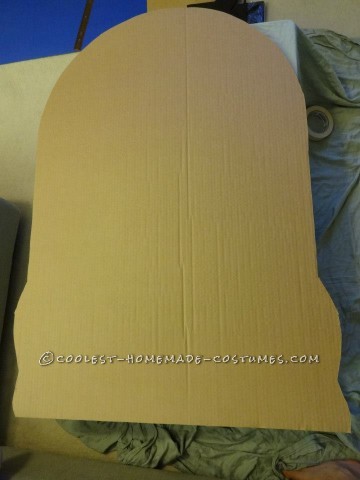