Calvin (Me): I colored a red shirt with sharpie to make the stripes, wore black shorts and a backpack I already had, and dyed white ked-like sneakers red for the shoes! I give, I had to buy the wig but I did spray it with a yellow paint to make it more cartoon like!

Hobbes (boyfriend): This costume was definitely more complex, so I will list it in steps:

My boyfriend had never had a cool home-made costume before, and I DID start him with a more labor-intensive one but the proud look on his face when he was done spoke volumes! The greatest things about this costume was it brought us together during the fabricating process, exercised our creative muscles, got GREAT reactions from friends and family, and has both visual and texture appeal! 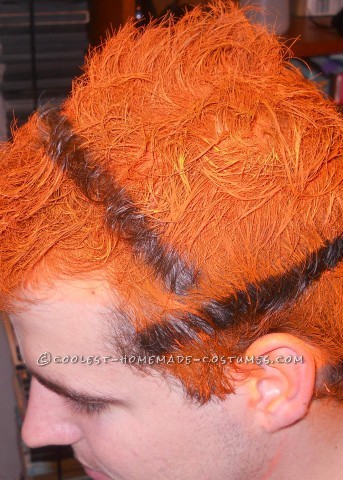