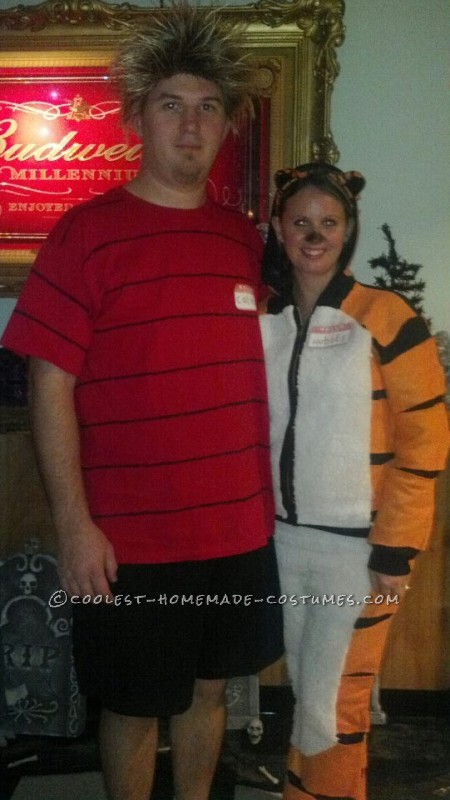 My favorite comic of all time (I have them tattooed on my body, for crying out loud), brought to life.  I opted to go for the realistic version of Calvin, as opposed to a cartoonish version.  The main reason was the hair.  I was finding his signature yellow spikes very tough to recreate, but I thought this spiked wig worked perfect in a realism sense.  The rest of Calvin was easy.  Red t-shirt with black magic marker stripes, black shorts, and white sneakers.

Hobbes proved to be a bit more difficult.  As this was somewhat of a last minute costume change (my other idea this year became too popular, forcing me to back out a week before the party),  I had to work with what I could find in stores, not online.  For this reason, I was stuck with attaching large strips of orange fabric to a black sweatsuit, since I couldn’t find an orange sweatsuit anywhere.  Attaching the thinner black stripes to that would have been much easier.   Fabric was bought to match the ears and tail.

Wife (Hobbes) insisted on name tags, because a few of her coworkers (obviously sheltered children) had never heard of them.  True fans spotted us from across the room, and were quick to pay their compliments.