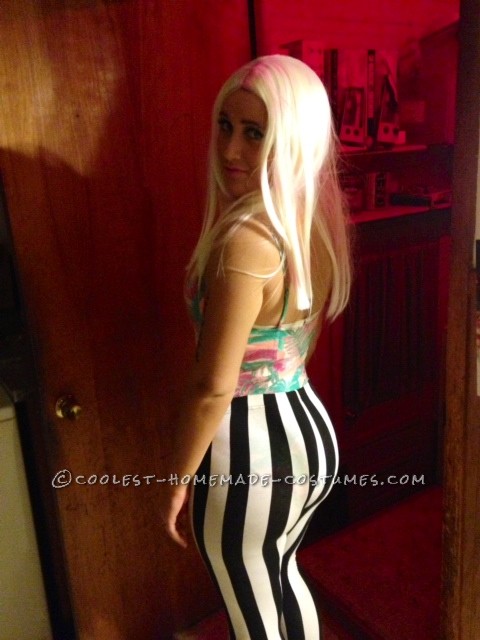 So for two years now I have been telling my friends how badly I wanted to be Beyonce for halloween (or just  for every day because I idolize her). I really contemplated on how I would do it and I kept doubting the outcome. I really never want to have a costume where people have to ask “What are you?” and I wasn’t sure on how I could avoid that. After some brain storming I thought.. Hmm.. A Nicki Minaj costume is one that could definitely be recognized. So I immediately started looking up pictures of her to get an idea of an outfit that would do the job. She obviously has so many things about her that give her a distinct look; from her colored hair, crazy make up and bright outfits I was sure I could come up with something.

I had seen some girls I know dress up as Nicki years ago, around when she first became popular. I wasn’t really into her then and decided to go with something closer to her look now. My first step was finding a light blonde wig because that’s her hair color currently. I looked around eBay and found one for about $15. It was high quality hair and I was really satisfied with my purchase. Now that the hardest part was out of the way I decided to go to the mall and just browse for the outfit. I realized in most pictures I saw online Nicki wears a lot of tight pants or jumpsuits and I also saw a few crazy skirts/ tutus. I found these beetle-juice looking, black and white striped leggings from H&M for $12. (I also based my outfit on whatever flattered my butt because I did not plan on stuffing it! haha) Next I went into forever 21 and skimmed the clearance section for some kind of bright/colorful crop top I could match with the black and white pants. I got super lucky and found the blue and pink top (which actually was a body suit) for $5!!

The rest of the costume was really just Nicki’s typical acessories. I found cheap, large gold hoops and a chunky gold chain from Wet Seal. Next, I bought fake eyelashes and also fake nails. I already owned bright pink nail polish and lip stick– these are a must for Nicki’s look! I also purchased a few gold rings to add to my fingers. As you can tell I went all out.. I really love Halloween :). The last thing I found were the bright turquoise heels… $7 on clearance at Deb!

The last touch for this costume was the make up. I’m really not a girl that super into make up so ANYONE can do this. I just went through youtube and found an awesome tutorial. After putting this look all together I finished it off by trimming my wig to be more of Nicki’s length and adding a little pink spray in it like she had in the Beauty and a Beat music video. I really loved my version of her costume because it was completely unique. I saw so many costumes of her with the same store bought wig and outfit so I loved that this was different but you could still tell who I was. Everyone knew who I was supposed to be and it was a hit! I even added her tattoo last minute and everyone loved that! 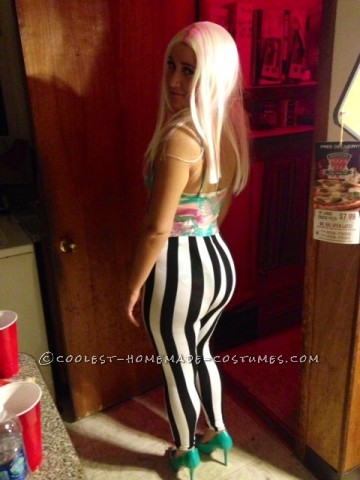 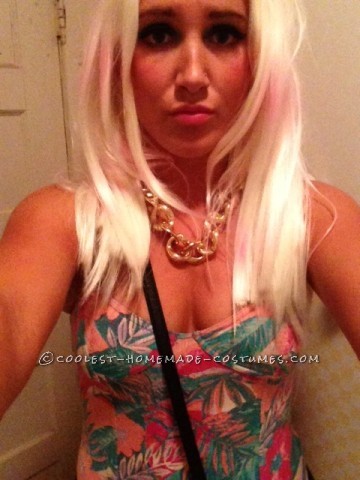 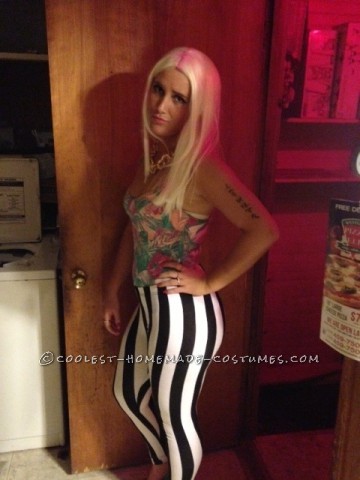