This woodland witch costume came about because of the question: Why is a witch traditionally depicted with green skin? The answer was that she was becoming part of the forest. So from there I set out to create a character that looked like she had just uprooted from the woods and came out for Halloween.

I took a dress that I had made for a previous project and used about five colors of fabric paint to create bark on the bodice of the dress. This took days! Then I sewed on about 2000 fake leaves to make the base of the “tree” look as though it had lost all it’s leaves and they were just laying around it. This was the most difficult part as this was a six panel skirt that had a lot of fabric. Then I glued some moss to the collar for some added naturalness. The hair was the funnest part. I took a fake branch from the floral section of the craft store. Made a loop at the bottom of it and secured it with tape. This loop is where I pulled my hair through and then separated into three sections to turn into the three buns. I used three bun makers so that they would all be full and stand out. I then used bobby pins to secure the buns in place, thereby securing the branch in place. I took a nest, also from the craft store, and glued some milkweed down and a couple of feathers in it. Then sewed on a hair comb and used it to convey the feeling of being in the tree tops. I created another little hair comb with some black and iridescent green feathers. The wand was made by a friend in Maine who is as much in love with this holiday as I am. I also did my own hair and makeup. Everything about this costume is handcrafted and unique.

The best part while out wearing it was the response I’d get when I told people that the bark was painted by hand. They were shocked at how real it looked. I won second place in a local contest. It was a really close second. I hope you enjoy the costume as much as I do.

Thank you for considering me. 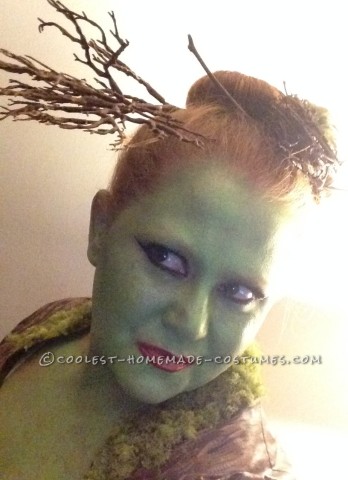 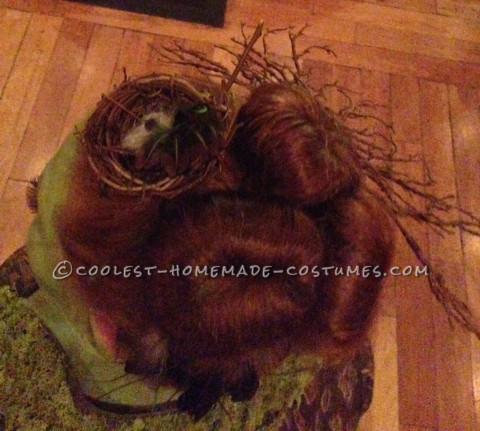 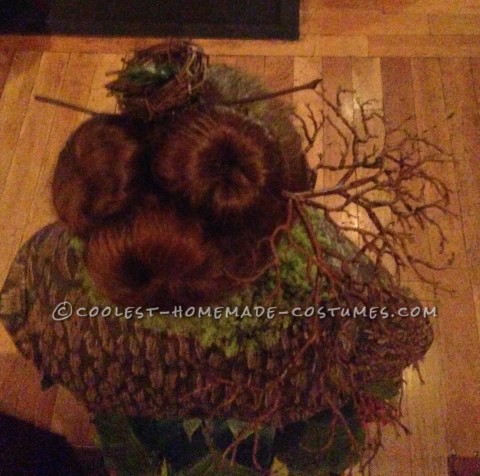