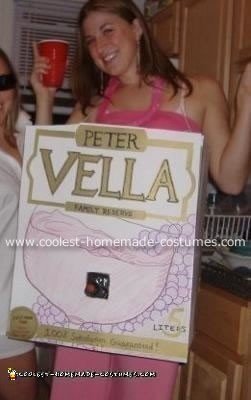 I was bored with having to spend a lot of money to come up with a creative costume. So after a few days of consideration, I got this amazing idea to be a box of wine for Halloween. Now, normally, everyone does the Franzia thing, so I decided to buy a box of Vella and recreate myself as a working box of wine costume! That’s right!

I bought 2 large pieces of poster board, some gold poster board (for the letters and borders of the box)then I redrew as much of the VELLA box and as many details as I could in pencil. Then I used a Sharpie marker and colored pencils to create the grapes and wine glass images.

I used black glitter puffy paint to make the outlines of the letters stand out. After everything was dry, I used heavy tape and glue to form the outer box covering of a large cardboard box that I got for free from a packaging store (like Costco or BJ’s).

I cut a small hole in the front center part of my costume, poured half the bag of wine into a water bottle for later, and used serious amounts of duct tape to keep the bag of wine in place. Because I was blush wine, I used a pink tank top and pink pants to represent myself. I then cut out a large U shape at the top and bottom of the box so that I could attach some string and wear the box of wine straps over my shoulders.

My friends really got a kick out of it, and even more so when I would tell them to bend down and take a swig!