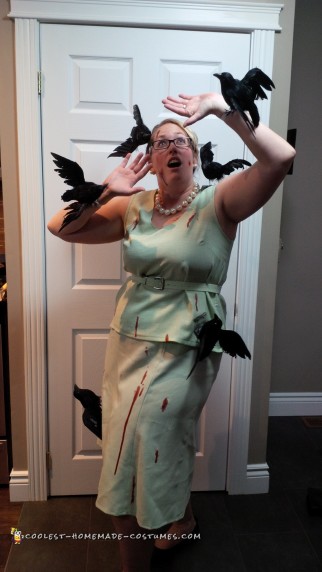 I had thought about this costume for Halloween for a couple years before doing it.  I like doing scary costumes for halloween, I also like doing recognizable costumes.  My friend and I usually dress up together and she wanted to be a crow, I thought it was the perfect opportunity to do the Tipi Hedron costume and still be a related costume.

I found the top and skirt at the thrift store, I had a jacket but it was too hot so i ended up wearing just the top with a belt over the skirt so it looked like a dress.  I ripped it up a bit in places where I attached the birds, and added lots of dripping fake blood.  I wore an oversized pearl necklace and did a french roll in my hair.  I also just wore plain black flats.

I ordered the birds online from ebay because I couldn’t find what I was looking for in store, they were too big or too heavy or not in the right position.  These ones had their wings up right looking like they were flying or just landing, which was perfect for the costume.  I attached two birds to elastic wristbands I made from elastic from the dollar store, when I flipped them around and put my hads above my head it looked like they were flying to attack me.  I also glued one to a hair clip that sat above my head, again in an attack mode.  The rest I attached to my outfit near blood holes and rips in the dress of course.

The makeup for this costume for Halloween was mostly simple, I did my own makeup as I usually do, but I had to add peck marks in my face, arms, and legs.  I used spirit gum for this.  You put a drop of it on the skin, let it dry and then pull at it with tweezers to make what looked like a hole pecked in my skin.  Then I filled in the holes with fake blood, let them drip, and dry.  I did this for my face, arms and legs.

I think this Tipi Hedron costume for Halloween turned out really well and everyone knew who I was.  I wore it twice and by the end of the second night the birds were a little bit worse for wear just due to everyone bumping into them.  It was a lot of fun though! 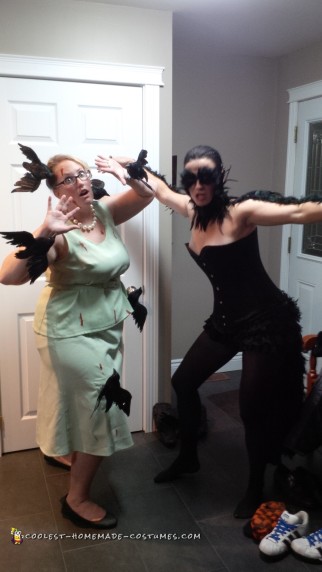