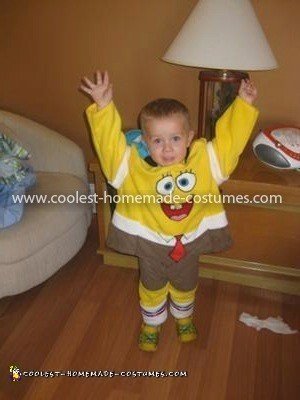 I have three kids 3 and under (#4 is on the way in December). Since they were born I have made their Halloween costumes. I like to make them coordinating. We had Babe Lincoln, then Cookie Monster and Zoe, and last year with three we ended up with Spongebob, Sandy, and Plankton.

My eldest son (2 at the time) was Spongebob Squarepants. I made a square using fleece and fusible fleece interface on the top in an attempt to keep the square. We live in North Dakota (usually snow at Halloween), so I make my costumes mostly out of fleece to keep the kids warm.

I added the Krusty Krab Hat as the hood. I appliqued on the eyes, mouth, and tie. I made his nose stick out. I made the bottom of the shirt and the top of the pants to resemble his brown square pants (had to add an extension on Halloween afternoon, when I found out they were about a size too small – ugh). I also added the stripes out of ribbon to his socks.

My little girl (1 at the time) was Sandy Cheeks. She happen to have white velor pants, so that saved me a little time. I made her jacket out of fleece and used a panda pattern for her helmet. She has the acorn patch on her jacket and a pink flower on her helmet. Her helmet is made of a sparkle sheer. Underneath the sheer, there is her furry squirrel head with ears. I made her tail detachable so she could ride in her car seat without having to take off her costume.

My youngest son (3 months at the time) was Plankton. I made a onesie with a hood for his body. I added on two small antennae. Plankton’s mouth, eye, and eyebrow were all appliqued. The eye and eyebrow are covering the zipper so I could only sew one side on and then the other side attached with a snap. 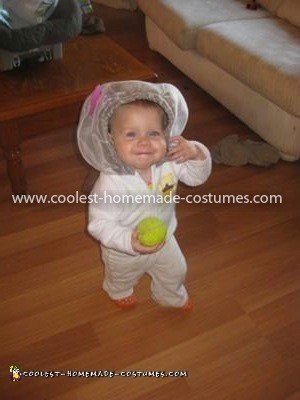 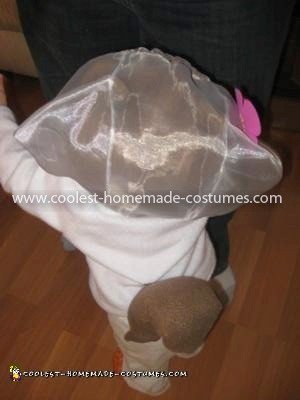 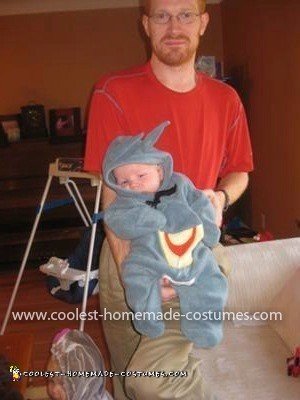